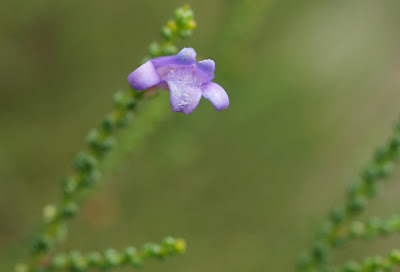 While I'm on a roll, here's another Eremophila, the Coccid Emu-bush. I was tempted to title this post the cock-eyed-emu bush but I couldn't find any connection between this plant and sight & flight impaired birds.

The common name is in fact a reference to the tiny cupped leaves I presume. Coccid come from the Greek kokkis, which means grain. The botanical name Eremophila gibbifolia covers much the same territory, with the last part referring to the bulging or humped leaves. 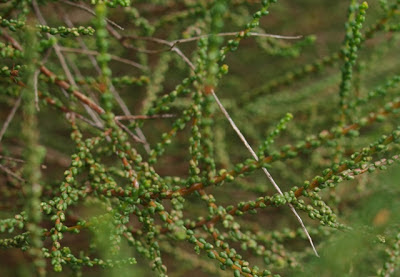 As you'll recall, Eremophila is the Emu-bush genus. Now, apologies for getting all historical and taxonomical. I drift into this from time to time. It's such fun!

In a paper on 50 new plant species from Australia published in 1855, the first Director of the Melbourne Botanic Gardens, Baron Ferdinand von Mueller, described this species from 'stony ranges' at Mount Barker Creek in South Australia, placing it in an apparently new genus called Duttonia along with another species from a 'rocky creek'.

As bad luck would have it, this was a name he had used already in 1853 for a daisy genus. So four years later he slotted the Coccid Emu-bush (and its rocky creek ally) into Eremophila, a genus that Robert Brown had erected back in 1810, and one that now includes a couple of hundred species from Australia.

I'm not sure why this happened but presume it was a lapse of memory from Mueller, to be forgiven when  faced with 2000 species to describe in a scantily documented flora.

Dutton, I'm thinking, was Francis Dutton, a farmer-politician from South Australia. Mueller knew him from his time in Adelaide, on arrival in Australia a decade before.

The Coccid Emu-bush grows in various places around the road from Melbourne to Adelaide, but also on the other side of the Gulf of St Vincent as well as further eastward in Victoria near Rushworth and Wedderburn. It's a rare plant in the wild. 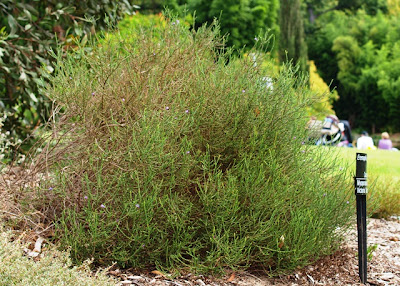 However you can see this plant in flower at the moment in the Australian Garden at Cranbourne, or as photographed here, in the Mallee Rare and Threatened Plant Garden at Melbourne. It also sits outside the National Herbarium of Victoria, in a garden featuring plants collected and named by the Baron. I wonder if we could get away with calling this display 'Baron but not Barren'...

Note: I'm going to reduce my blogging rate a little so expect posts every week rather than every 3-4 days. [Update 3 July 2013: I seem to be falling into a rhythm of every 5 days at the moment...]