Castlemainia, a significant part of the Victorian craze for botanic gardens 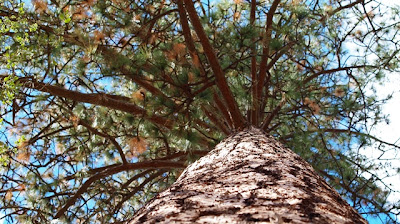 In the second half of the nineteenth century, Victorians living in Victoria were (on average) creating botanic gardens at the rate of more than one a year.

According to Gwen Pascoe's Long Views and Short Vistas (2012), 45 botanic gardens were established in Victoria between 1846 and 1888. One of these was the Castlemaine Botanical Gardens, gazetted on 21 February 1860, and I visited it last weekend.

The Gardens first Curator, Phillip Doran created and cared for the Castlemaine Botanical Gardens from 1866 until his death in 1913 (aged 83), a grand total of 47 years in the job. Doran had worked for a time in English gardens, including an apprenticeship with Joseph Paxton at Chatsworth, before migrating to Australia.

Sometimes Mueller is implicated in the design of this botanic garden. It seems that he provided plants but not landscaping advice, although the design today has more of the Mueller than the Guilfoyle about it (them being the first two Directors of Melbourne's botanic garden). 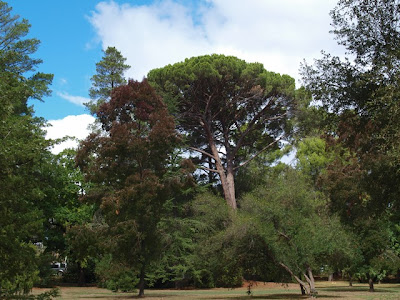 Most of the significant trees I saw on the weekend were provided as seed by the Government Botanist Ferdinand Mueller, but also the curator of the Geelong Botanic Gardens, Daniel Bunce. I had to borrow Lynda's iPhone, and her app, to find out how many specimens are on the National Trust's Register of Significant Trees today. 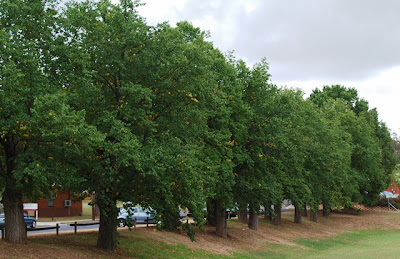 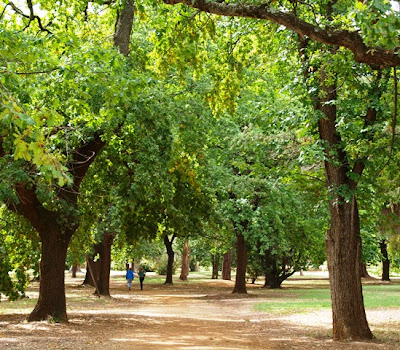 The significant trees are all over the shop but there is an 'informal arboretum', as it's described in the Statement of Significance, up the north end. 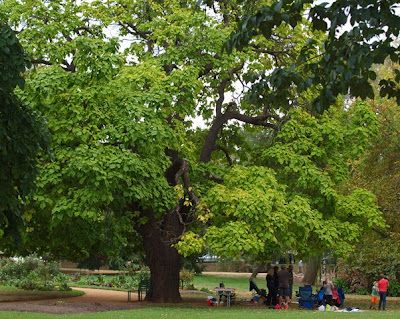 One of the trees I was very fond of on my early visits to the Gardens was this Catalpa bignonioides, near the main gate. Its lime green leaves were particularly appealing in high summer. I gather this one was planted in 1872 by Philip Doran and the Significant Tree app describes it as 'the finest and largest known example in Victoria'

The pines I particularly enjoyed last weekend. Some stately Stone Pines (Pinus pinea) as well as others such as this Maritime Pine (Pinus pinaster) with its strongly textured bark. Other pines listed as significant are Pinus ponderosa, Pinus sabiniana and Pinus torreyana.

A couple of historic notables in the rest of the list are the tropical and often weedy Vachellia (previously Acacia) farnesiana, the Sweet Acacia, and the Asian Pittosporum illicioides (previously Pittosporum sahnianum) which features in the Southern China Garden beside the lake in Royal Botanic Gardens Melbourne.

There are also some interesting oak and elm species, cultivars and crosses. The oldest planting is a Quercus robur planted in May 1863 to celebrate the marriage of the Prince and Princess of Wales (Edward and Alexandra).

There are also some very nice Cork Oaks (Quercus suber). 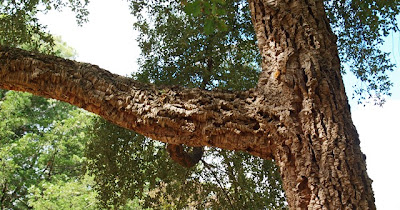 The Gardens has shrunk over the years from its original 31 hectares. Today the botanic garden component is  24 hectares after bits were hived off for a sports oval, caravan park, swimming pool and eventually a hospital. Still, over the years (since I lived there in the late 1970s and during family visits before and after then) I've used and enjoyed all but the last as much as the botanic garden.
Email Post
Reactions:

Online Plants For Sale Melbourne said…
Thanks for sharing informative post. Pittosporum is a perfect hedging plant variety that helps in screening your home or commercial places.Some of its varieties include Pittosporum Silver Sheen & Pittosporum Green Pillar.
10:51 pm, January 08, 2019