Riberry too red for me and for some too spicy 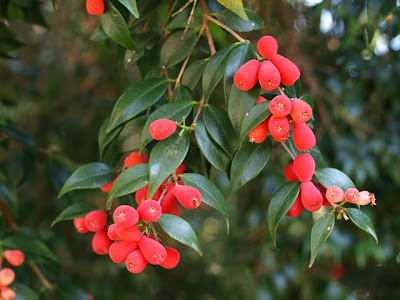 The fruits of Syzygium luehmannii are too red to photograph, at least with the kind of equipment and expertise I possess. The red is just too much.

In nature, and that would be northern New South Wales and Queensland, the red fruits must be very attractive to the local birds. In a botanic garden such as Melbourne's Royal Botanic Gardens (where this specimen is photographed, poorly) they attract the attention of everyone walking through D Gate, plus a bird or two I imagine.

Our first Director, Ferdinand Mueller described this species in 1893 from a specimen collected from the highest peak in Queensland, Mount Bartle Frere, by Stephen Johnson. He called it a Eugenia, which was where it sat until 1962 when the then Director of Sydney's Royal Botanic Gardens, Lawrie Johnson, moved it into Syzygium at the time of a major revision of the lilly pillies.

This species is sometimes called the Small-leaved Lilly Pilly but I prefer Riberry. David McMinn reckons the Riberry has the best commercial potential of all the lilly pillies. With its twice yearly flush of pink new growth it's already a popular ornamental plant and grows as far south as Melbourne - as these photographs attest! 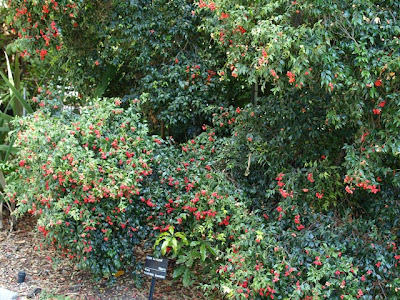 McMinn says the fruit has a spicy flavour due to aromatics such as 'myrcene (nutmeg), pinene (many herbs) and limonene (bay leaves)'. This gives rise to another of its common names, the Clove Lilly Pilly, and perhaps to its lack of popularity among those who like their fruits simply sweet and...fruity. The full complexity and reason for its distinctive taste is part of a larger study on bush foods.

If you are wondering what to do with your harvest of riberries, try it (according to McMinn again) with kangaroo, venison, poultry, lamb or pork. Just don't try it with beef or fish, apparently. It also does nicely in 'salads, vegetable dishes and desserts'.

Aboriginal people have eaten native lilly pillies for tens of thousands of years. Early European settlers turned the fruit into jam and cordial. For most Australians today, though, they are perhaps too fiddly to prepare. With cultivars of Syzygium luhmannii already boasting fewer seeds and larger fruits, soon, perhaps, you might find plump riberries in your local fruit shop.

And where does the name 'riberry' come from? Don't know. Berry, I get, but Ri? Do let me know if you can shed some light on its etymology, without further overexposure to these gorgeous berries! 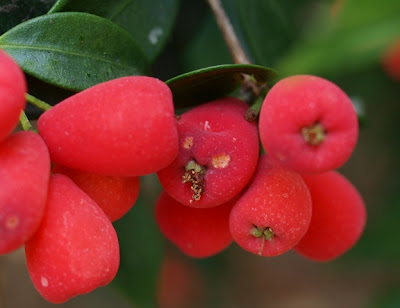