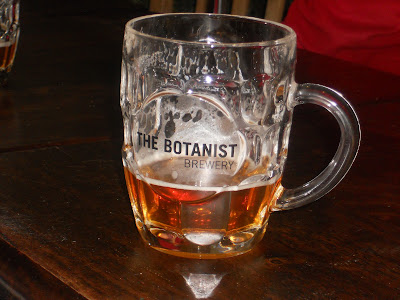 Unashamedly, this post promotes The Botanist, our local pub, and its ales. It's taken me a while to appreciate English beer (nearly two years?) and even now it's always an awful decision between a Chilean red, Guinness on tap or one of the local brews.

Just about every London pub (and shop for that matter) belongs to a chain. In this case it's Convivial London Pubs, who run six other hotels dotted across London. Our one, suitably named given it abuts Kew Gardens, brews various beers from Hordium vulgare (barley), Humulus lupulus (hops), and traces of Triticum species (wheat). That is, plants!

Even more exciting, various species of fungi, mostly Saccharomyces, complete (or make) the magic. And at The Botanist you can learn a little about beers and the history of Kew Gardens. What a potent combination!

First up is Humulus lupulus, a pale ale, hoppy and dry (according to The Botanist's own notes) and relatively light on alcohol at 3.8%. Named to remind us of the Latin binomial for hops.

Queen Charlotte is a Kolsch style, a little like the (imported) Pilsner beer I used to like drinking in Australia.It's pale colour and delicate taste belies it's slightly stronger alcoholic content at 5.2%. The name commemorates the wife of George III who used to enjoy staying in a cottage that still stands in Kew Gardens. George III merged two Royal parks to create the modern day Kew Gardens estate and encouraged Sir Joseph Banks to turn it into a world botanic garden.

OK Bitter is a traditional English bitter that celebrates the reputed coining of the term 'OK' in Kew. Although the argument relating to 'Of Kew' is well explicated above the men's urinals, it seems almost universally accepted elsewhere that the term originated in the USA, in the early nineteenth century.

You also have Kew Green (the view from the window), 391 Brown Ale (presumably homage to one of the buses that passes by the window) Q Gold (brewed in honour of the Queen's Jubilee), Maximus (6.2% alcohol; Latinised to sound a little botanical) and Nemophila (featuring a Californian Bluebell, Nemophila menziesii, on the label).

As you sip on your botanical brew you might also take the time to learn more about the origins of beer making from your handheld e-device. For example, in this learned article on beer brewing in Mesopotamia, in the 3rd millennium BC, its hypothesized that the transition from hunter-gather to a less nomadic life style in Neolithic times may have been driven by the intoxicating and pleasurable effects of beer. You can't grow Hordium, Humulus or Triticum on the run!

So an education in a pint or two. I'll leave you with my son Jerome sampling Humulus lupulus, and Greg Redwood, Richard Wilford, Paul Smith and me celebrating Christmas 2012 at The Botanist, having moved on to the magic of Saccharomyces cerevisiae acting upon Vitus vinifera. 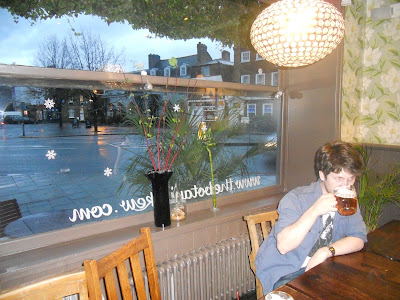 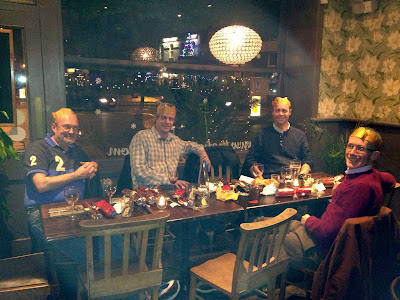