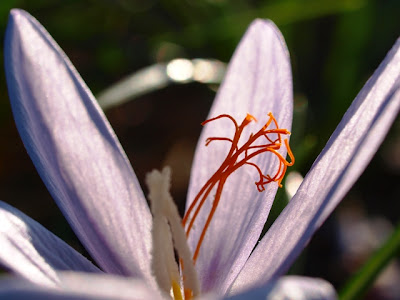 Everyone knows saffron comes from the style - the showy female bit - of crocus flowers. More specifically, it comes from Crocus sativis, and this species only.

Which is surprising when you see the richly coloured and extravagantly branched styles of Crocus tournefortii. This species is in flower now, in the middle of December, in the middle of the Rock Garden at Kew Gardens. 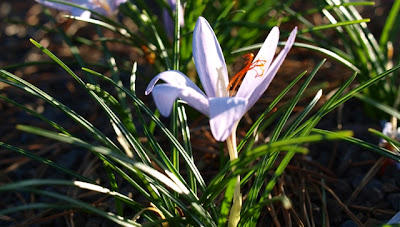 Crocus tournefortii, a species from the south of Greece and Crete, has a beautifully branched style. Unlike most so-called autumn crocus (this one is flowering very much in the middle of winter), the flowers also stay open, even on a dull day. So this is a cute winter flower.

At the last summer's meeting of European botanic gardens, called Eurogard (I've already made rude comparisons with insect repellents in this blog), Jose-Antonio Fernandez from Albacete, in Spain, gave a great little talk on saffron. He said Iran, with 90% of the market, was the world's biggest producer but places like New Zealand and Tasmania were catching up. It is the most expensive spice or food, being sold for somewhere between US$1,100 and US$11,000 per kilogram. That's more expensive than gold by weight.

It's expensive because it is not very heavy (150 flowers are required to produce one gram) and a lot of hand labour goes into its production. That said, it's a relatively sustainable crop, requiring little addition of fertilisers and pesticides.

Crocus grown for saffron is one of the oldest crops in the world, first cultivated up to 5000 years ago by the Minoans. Although once used by Buddhists to colour their robes this is no longer the case and it is mostly used now as a food additive (and occasionally for medicine).

Fernandez is responsible for CROCUSBANK, a collection of seed from about 600 different populations of 50 different Crocus species. Crocus sativis is a sterile species now only propagated from bulbs so there is some concern that its lack of genetic variation might make it susceptible to disease, pests or accelerated climate change. At the moment many crops have to be replaced every two years to avoid fungal infection, even though they can exist and produce saffron for up to seven years.

There are 88 species of Crocus, so the bank already holds an important breeding resource. You can see quite a few of them in gardens around the world and this is not the first time I've featured the genus. Last time it was Crocus tommasinianus, the Early Crocus, making Crocus tournefortii either the Very Early Crocus or the Very Late one. 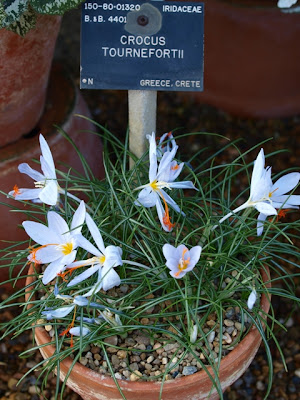 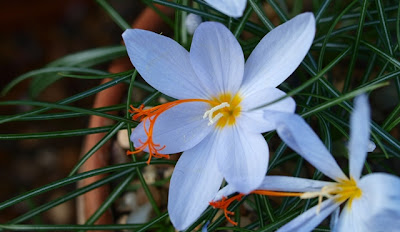