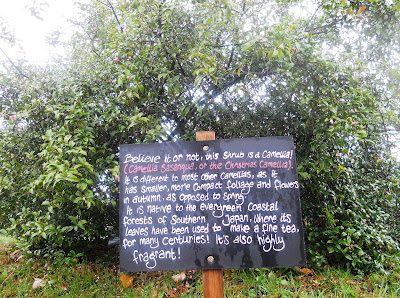 It's been a while since Camellia featured in this blog. The last time was in late 2010, when I argued it should be an honorary Australian genus. It rated a mention in passing a few times prior to that.

Today I was taking my weekly walk during my weekly visit to Wakehurst Place. As often happens, one of Andy Jackson's blackboard signs attracted my attention. The great thing about these signs - and my apologies to the legion of interpretation staff who have carefully crafted the many other signs that populate our two botanic gardens - is that you do read them. They are ephemeral and conversational, always an attractive proposition.

I was surprised to see one of these attractive signs on a plain old Camellia sasangua, the small-leaved parent of plenty of cultivars grown in Sydney. I checked later with Andy, who confirmed that in these parts (i.e. the UK) this species is not so commonly grown. Using a term I have got accustomed to over the last 18 months or so, it isn't particularly hardy.

The other thing that grabbed my attention was the apt (in these parts) common name - the Christmas Camellia. Of course you wouldn't use this name in Sydney. Makes no sense there at all.

But here in the Northern Hemisphere, the hemisphere that includes Japan, the native home of this species, the Christmas Camellia is a charming and appropriate name. That said, the flowers took a beating over the last few days and I'm not sure it will stay in full bloom until 25 December. But we'll see. 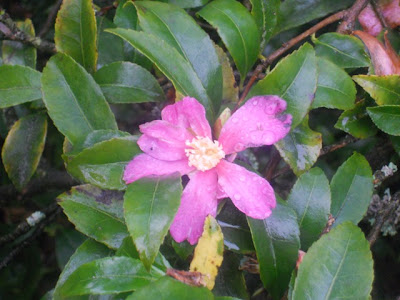 Without the sign it isn't much to look at. Just another shrub, albeit one with leaves, singling it out a little at this time of year. 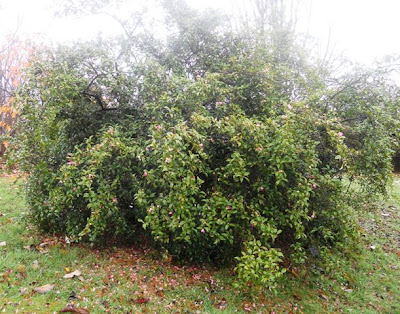 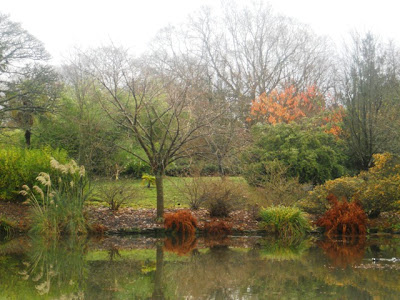 The UK may be in luck. Research published last year from the Hangzhou Botanical Garden in China identified five cultivars with high tolerance to colder climes. The research was geared towards growing Camellia sasangua in the area north of the Yangtze River by trialling five cultivars - 'Kanjiro', 'Asakura', 'Showa-no-sakae', 'Azuma-botan' and 'Egao' - all grown widely in the city of Hangzhou. All five survived temperatures at least down to -14 degrees C, which should cover most eventualities in southern UK.

Unfortunately, other than the abstract the article is in Mandarin, so I can't work out if Zhang and co-authors think these cultivars are special or that most cultivars of this species are more cold tolerant than assumed. In any case, a (globally) warming England would seem to be a suitable place for more Christmas camellias cheer.
Email Post
Reactions: