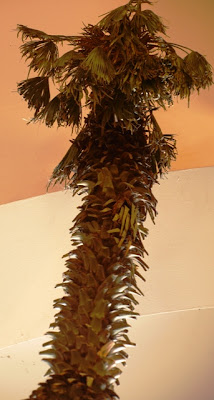 The European or Mediterranean Fan Palm (Chamaerops humilis) is the only palm native to Europe. It's a clumping palm with - as the name suggests - fan-like fronds, or if you like, fronds like fans.

It grows in Portugal, Spain, France, Italy, Morocco, Algeria, Tunisia and nowadays, in protected gardens in the UK. There is only one species in the genus and it seems to be a relic of when summers were warmer and wetter in Europe, more than five million years ago.

Today it's a botanic garden staple. The older the better. Berlin's Botanishcher Garten und Botanisches Museum goes further than most and displays an old and dead specimen.

In 1749, German botanist Johann Gottleib Gledistch took pollen from a male plant of the European Fan Palm growing in Leipzig and delivered it to the flower of a female plant of the same species growing in the Botanishcher Garten in Berlin. He did this because the nearly 100 year old specimen in Berlin had flowered very nicely but never set fruit.

By artificially pollinating the flower - much as you might do for your zucchinis or pumpkins today - he demonstrated for the first time that seed production in flowering plants depends on fertilisation and that pollen carries the essential 'male' contribution to this process.

All good. The plant lived somewhat longer and then, as we all do, died. The specimen is now somewhat inelegantly propped up behinds some steps inside the Botanisches Museum with the following plaque (poorly photographed) next to it. 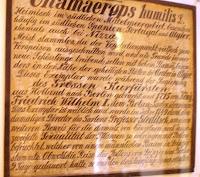 An older specimen, still living, can be found in a dedicated greenhouse in Orto Botanico di Padova, the botanic garden of Padua, near Venice in Italy. I visited this garden in 2008, giving it a glancing mention in a blog post the year after about the first flowers being modified leaves.

In that post I quote Johann Wolfgang von Goethe ('all is leaf'), a man of many parts. He mentions in an essay of 1680 (The Metamophoses of Plants) the European Fan Palm you can still see growing in this special home now. In fact it was planted in 1568, making it 444 years old in 2012 (I thought I'd do the maths for you).

Padua has the oldest botanic garden in its original location still existing today, and the palm in this odd little greenhouse is most likely the oldest* planted plant in a botanic garden. 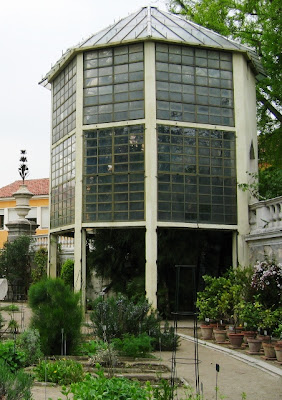 *Royal Botanic Gardens, Kew has arguably the oldest potted plant still alive today. It's a specimen of the cycad Encephalartos altensteinii, collected from South Africa in the 1770s. You can see this one in the Palm House at Kew Gardens.

Talking Plants said…
Well I know what to do with it when it does - chop the top off it and cart it to the nearest botanical museum.
Tim
6:25 pm, September 09, 2012