If you can't sit on it, eat it: the Picnic Thistle 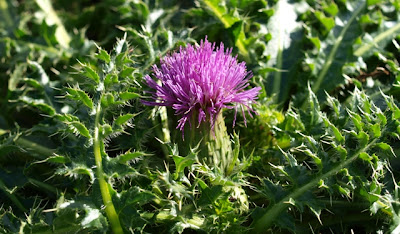 More commonly called the Dwarf Thistle, Cirsium acaule, is sometimes also called the Stemless Thistle because it is, stemless, more or less. It's also called the Picnic Thistle, presumably as an ironic name for a plant that wouldn't be welcome at a picnic location. Or perhaps it's named for the tasty mid-ribs.

What you get in the field is a rosette of spiky leaves close to ground level with one (or maybe two or three) shaving-brush-like purple collections of flowers. As with all daises, these flowers are in bunch that makes them look like a single, in this case petal-rich, flower.

Actually there weren't many of them in flower today.

The Dwarf Thistle is a UK native and Kew grows it appropriately enough in the UK Native Seed Hub at Wakehurst Place. Today it was in flower rather than seed as you can see, but much of the rest of the seed meadow was either fallow or post-harvest.

Outside our seed meadow this thistle likes dry, calcareous grasslands in south-west England - apparently attracted by the (relative) summer warmth - as well as elsewhere in western Europe.

Given it is so common it's not surprising that someone has tried to eat it. Turns out you can remove the mid-ribs from the leaves, scrape off the spines and burrs, then boil or stir-fry. I assumed this meant you'd use the rest of the leaves (sans mid-ribs). But turns out it's a bit like the old Australian recipe for cooking a galah (boil with stone for five hours then discard galah and eat stone): you use the skinny little mid-ribs.

And what you might use them for is Thistles with Spicy Prawns and Coconut. Yes really. It's worth noting that this species is considered unpalatable for cattle but that might be just because they can't be bothered stripping out the ribs and scraping them free of prickly bits.
Email Post
Reactions:

Talking Plants said…
Yes I gather the (spineless) leaves of Cardoon (Cynara cardunculus) are eaten. And I notice it's flowe buds like an artichoke - which arguably is a lot of bother for something moderately tasty.
Tim
12:05 am, October 01, 2012

Blogger said…
I've just installed iStripper, so I can have the hottest virtual strippers on my desktop.
9:10 pm, October 07, 2016