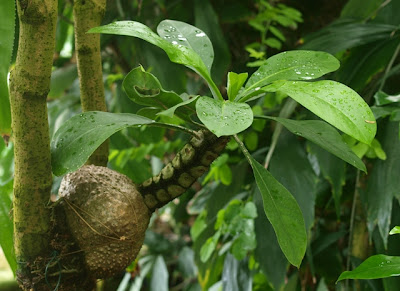 I think we all know the answer is that ants live where they damn well please, and not always in plants. Without doing the maths I'm also confident there are not enough ant-house plants growing in Australia to provide homes for the country's billions of ants.

So we can say that Ant-house Plants, or Ant-plants for short, are a specialised kind of habitat.

If you are interested in this special plant phenomenon, and live in Australia, Atilla Kapitany is about to publish (with Derrick Rowe; as the fifth volume in his The Australian Series, available through Atilla's Australian Succulents website) yet another of his lavishly illustrated books. This one is to be called Australian Ant-Plants: Amazing Relationships with Insects.

It will be a slim book, covering the eight species growing in northern Australia (none grow in the south, or middle, or even west - they all grow in tropical monsoonal country along or near the east coast of North Queensland). In the acknowledgements Atilla makes mention of a publication of broader scope, only available on DVD, by Derrick Rowe (Ant-Plants: Arboreal Wonders of Nature). You buy this DVD, and Atilla's new booklet when published, from his website.

Atilla sent me proofs of Australian Ant-Plants on Friday, inspiring me to take a look in Kew's Palm House for any ant-plants on public display. My guide was Lynda (Entwisle), who had noticed a few while volunteering with Kew's education team.

There are two species. Myrmecodia aff. tuberosa (the 'aff' meaning it has affinities with this species - i.e. either it was either too difficult to identify with certainty or it differs a little from normal tuberosa) from Australia and north to Vietnam, and Hydnophytum formicarum from the Philippines. They are, appropriately, both in the 'Australasia' section of the glasshouse.

Myrmecodia and Hydnophytum are in the coffee family, Rubiaceae, where most Ant-plants reside. Myrmecodia tuberosa is almost certainly the same species I featured back in January 2010, the topic of my weekend chat with Simon Marnie on Sydney radio (702AM). You can find out a little more about Ant-plants generally in that posting.

You can see in this close-up of Myrmecodia [aff.] tuberosa from the Palm Housea couple of small holes for the ants to enter the tuber, amongst short spines presumably designed to ward off predators larger than ants. Inside the elaborate network of chambers and cavities form even when ants are not present.

According to Atilla, Myrmecodia tuberosa (above and at top of posting) grows attached to various trees species in Cape York, but never paperbarks (species of Melaleuca).


There are most likely some more Ant-plants in the Kew's Princess of Wales Conservatory - but I haven't looked yet - and certainly some behind the scenes in the Tropical Nursery. You can't have enough Ant-plants, but often too many ants.
Email Post