Japanese irises at the violet end of the rainbow 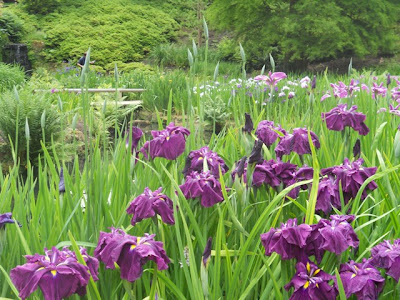 Around these parts, Japanese Irises bloom in late June and July. You can see up to 60 different kinds in bloom right now in the aptly named Iris Dell at Wakehurst Place. This year is a good one, after a lack lustre show last summer.

Japanese Irises, also called Hanasobu, are bred from one species, Iris ensata. This species has been bred and selected for 500 years to create more than 5,000 different cultivars, all flowers coloured white through to blue and dark purple (sometimes with some red hues). Recently, though, a little yellow has been introduced into the mix through crossing with Yellow Flag, Iris pseudacorus.

The British Iris Society website describes Iris ensata as, along with Iris laevigata, the source of the oldest iris cultivars. They mention a poetic reference in the 12th century, and confirmed culivation and breeding in the 17th. As you can see they don't have a beard, which is characteristic of what I like to call the Van Gough Irises. (In addition to the lack of a beard they are shorter and tend to fall over less than their hirsute relatives.) 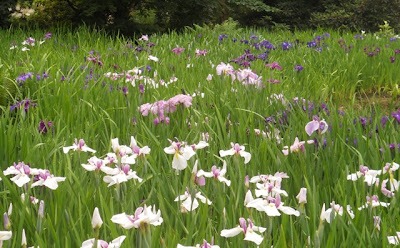 The first year these irises were planted at Wakehurst Place, nearly every individual plant flowered. Since then, despite lifting and dividing about a third every year, this is about the typical proportion we have in flower at one season.

The name iris comes from the Greek goddess of the rainbow, a nod to the variety of colours found in throughout the genus, and ensata means sword-shaped, presumably referring to the leaves. Our collection of Iris ensata clearly demonstrates that part of the rainbow expressed by this species, albeit with the occasional injection of yellow (although none out at the moment). 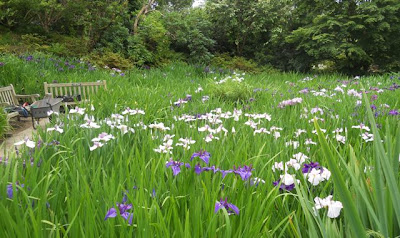 Iris ensata grows naturally in Japan and, with some assistance from humans, in natural habitats of China, Siberia and Korea. It's also found in countless bog or boggy gardens around the world, such as this.

Images: If only I'd had my proper camera with me. These are a few pictures from my pocket version, not doing the beauty of these plants and the setting any justice. Still, could have been worse if I'd had  only my phone.
Email Post
Reactions:

Here's a display of Iris ensata in Kyoto my understanding is that they have been growing and flowering in this spot since pre the Heian period.....
I'm pretty sure they are never lifted.

Talking Plants said…
Very nice! This suggests lifting and dividing may not be the secret! Actually I think light is pretty important and some of ours are quite heavily shaded. Thanks for comment and link.
Tim
10:43 pm, July 02, 2012