An Ancient Greek with smelly feet? 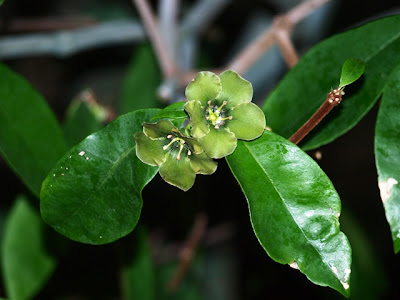 Damn that Angiosperm Phylogeny Group III! The original and the first sequel would have given me the chance to talk about the family Theophrastaceae for what we call at Kew we call the Smelly Foot Plant. As of 2009, when APG III was published, I should be using the family name Primulaceae.

A shame. I was going to mention that Theophrastus had one of the first botanical collection of plants, a 'botanic garden' even. That he was a big plant eater, one of the earliest documented vegetarians. And that he famously said life is ruled by fortune, not wisdom (which we may not like but have to admit is often true).

Ah well, it would have been (even more) gratuitous anyway. Theophrastus has little to do with Deherainia smaragdina, unless he had smelly feet. For the sake of my original (pre APG III) story, let's just say he did and what a happy coincidence that Deherainia smaragdina flowers smell like his podos, or perhaps a rather mature cheese. 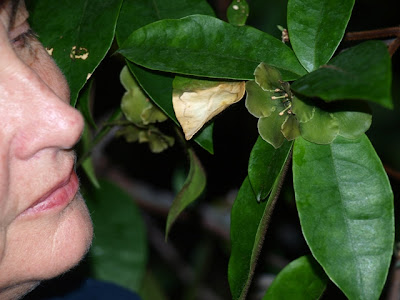 Like Lynda in this picture, I had the pleasure of sniffing this flower in Kew's Palm House. Deherainia smaragdina is a rare plant from Central America so it doesn't have a common name, or at least one commonly used by the English.

Apart from its distinctive odour, caused by a 'fatty acid derived ester', it also has distinctively coloured flowers - green. Green flowers are unusual because they are difficult for pollinators to find. Presumably that's why it needs such as strong odour, albeit one that presumably attracts bugs and bees that like decaying matter.

The upside of having green flowers is that you can use them for photosynthesis (turning carbon dioxide and water into sugars and oxygen, using the sun's energy). For a plant that lives deep in the forest, this wouldn't be such a bad thing. The genus name 'Deherainia' is presumably in honour of 19th century plant physiologist Pierre Paul Dehérain who worked on plant photosynthesis, respiration and that kind of thing.

The species name 'smaragdina' means emerald-coloured, as I remember from my days back in Melbourne (Australia), where one of the relatively newly described species of tall greenhood was named Pterostylis smaragdina. If fact, if I'm not mistaken, David Jones also used this name for his dog.

But that's all by the by. The Smelly Foot Plant has nothing to do with Theophrastus and more to do with a French botanist who I couldn't possibly associate with smelly feet or cheeses. 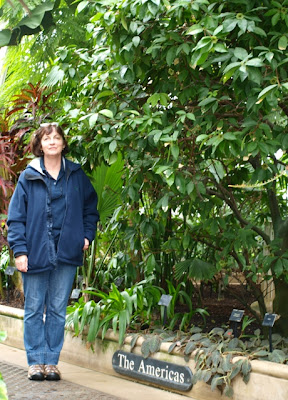