The lonely Texan at Wakehurst Place 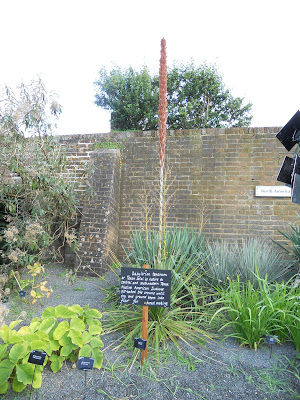 Every visit to Wakehurst Place is a pleasure, and as with every botanic garden there is always a plant you notice for the first time. A couple of weeks ago it was the Texan Sotol, sometimes also called the Desert Spoon because the plucked leaf has a spoon-shaped base (something I didn't test).

This tufty and prickly plant produces striking flowering stems in late summer - at least late summer in Sussex! Sussex, just south of London, is an odd place to find a plant that normally survives on little or no rain for most of the year. Clearly it's a tolerant Texan.

Dasylirion texanum is one of 18 or so species in this genus of desert plants from southern USA and Mexico. They look like a yucca or agave - Dasylirion has been classified in the Agavaceae family, but more recently moved to the Dracaenaceae (with the Dragon Blood Tree).
The leaves of the Texan Sotol are sharply toothed on their edges so this plant is set back a little from the path, meaning I had to step gingerly through the garden to take the picture (both to avoid spines and other nearby plantings).

I gather the plants don't bloom every year, whether in Texas or Sussex, and they are either male or female. Our Wakehurst plant seems to be a female, at least from this picture - I would have looked more closely if I'd known at the time this was one of those species that likes to keep its male and female bits separate... 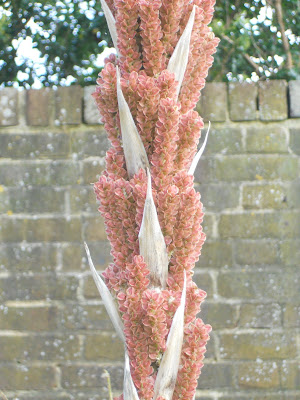 Pollination, in Texas, is by various local insects. In Sussex it doesn't much matter given there is only one lone female, but perhaps it will produce seed anyway. (Must look on my next visit.)

The giant flower stalks are dried and used in flower arrangements by modern day Texans. Native Americans have used the leaves to weave baskets and mats, and also, according to the charming blackboard sign erect by Head of Wakehurst Place Andy Jackson '...pit-baked the crown until dry and ground the into flour for bread making’.

This is one tough plant. Clearly drought tolerant but also frost hardy except when young. I gather it will tolerate temperatures as low as -15 degrees C, which it (and I) may well experience every now and then during a Sussex winter.
Email Post
Reactions:

Rohrerbot said…
Beautiful plant. I've never seen this one before. I like the vertical appearance.
8:52 am, September 16, 2011