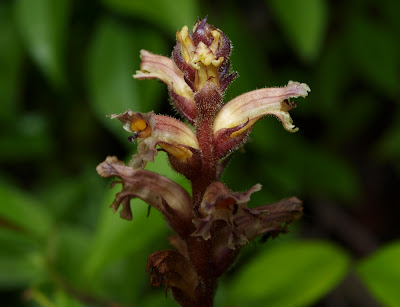 I love this plant. Dull brownish flowers, no leaves, and free-loading off that rather commonplace plant, the ivy.

Orobanche hederae, the Ivy Broomrape, is a parasite. It gets all its food from creeping ivy rather than the sun. Anything that slows down the growth of ivy (Hedera helix) is a good thing, right. 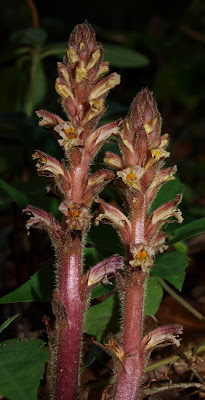 According my handy little reference on wild Kew plants (Tom Cope's The Wild Flora of Kew Gardens) the species was first reported from the botanic gardens in 1924 but was 'long known from various places in the Gardens on ivy, as, for example nr [sic] the Order Beds'. There is one record of it being in cultivation in 1903.

Of course it would have always been a plant out of place even if the ivy had been deliberately included in the Araliales bed, where it belongs, Orobanche should be in the Lamiales. Best thing would be to plant the ivy in its proper bed but let it extend through to the Lamiales bed, setting root I presume, and allowing Orobanche to surface in the right place.

I should add that we have enough trouble getting all the various species in an order growing together in the one bed without adding this complication. Also Orobanche isn't the most attractive or obvious member of the Scrophulariaceae family in the order Lamiales - think Buddleja and Eremophila (although this pretty Australian shrub wouldn't be hardy in the UK).

But back to wild Kew. The Ivy Broomrape is a coastal species, so it reminds us that Kew Gardens sits beside a tidal river, the Thames. It was introduced near the School of Horticulture, suspiciously close to the Order Beds!, but it thought to have been native in the area anyway.

Tom Cope says it seemed to have survived as seed when the ivy was (incompletely) eradicated along the wall beside Ferry Lane. Where I live is a skip and a jump from Ferry Lane and it thrives in an ivy infested corner of our garden. Cope says it's only occasionally now seen away from the Gardens boundary wall and I can't recall seeing it elsewhere in the Gardens. But then it's not something that would jump out at you...

Images: taken this morning in my backyard, in Kew Gardens, growing on a variegated ivy.
Email Post
Reactions: