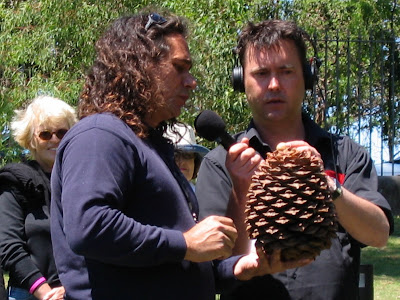 The Bunya Pine, or Bunya Bunya Pine (Araucaria bidwillii), is most famous for its giant cones that will render you senseless if they fall on your head. We fence off one of our more exposed Bunya Pines in the Royal Botanic Gardens during fruiting season to protect our visitors.

The species is only grows naturally in a couple of places in Queensland – most famously in the Bunya Mountains, near Kingaroy (where I’ve seen it) but also at the head of the Brisbane River and in two places in far north Queensland.

The cones can weigh up to five kilograms and be the size of a rugby football. They contain up to 600 grams of starch-rich seeds which can be eaten raw or roasted. Aboriginal people in the Bunya Mountain region would travel long distances to collect the fruits, celebrating the occasion with feasting and sporting competitions such as wrestling, spear and boomerang throwing.

Ross Muller at Brisbane Botanic Gardens has gathered up some historical information on bunya pines. He says early settlers corrupted the local Turrbal name Bonyi-Bonyi to get Bunya Bunya. Other Aboriginal communities had similar names – the Kabi Kabi called it the Bunyi (which seems an even closer fit) and the Dungidau the Ba’njii.

Andrew Petrie was apparently the first European to become familiar with the tree, in 1838, and his son Tom attended a Bonyi feast in 1840. It’s thought that Petrie (senior) gave specimens to John Bidwill while he was Commissioner of Crown Lands for the Bay District. Bidwill took dried and living specimens to London and presented them to the Director of Kew, Sir William Hooker.

Hooker described the species in honour of Bidwill who later became Director and Government Botanist at Sydney’s Botanic Gardens, but five months in late 1847 (Charles Moore had been appointed, from London, and arrived in 1848 to hold the position for 48 years).

Bidwill is remembered here by a Kauri Pine (Agathis robusta) which he collected, now the tallest tree in the Royal Botanic Gardens and apparently immune from flying fox damage. It came to the Gardens via William Macarthur’s garden at Camden Park.

*This Passion for Plants posting will also appear on the ABC Sydney website (under 'Weekends' or search 'gardening'), and is the gist of my 702AM radio interview with Simon Marnie on Saturday morning, between 9-10 am.