When one species dies, others go with it 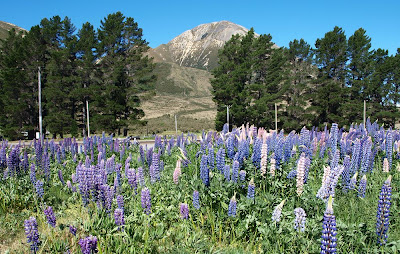 One of the likely consequences of accelerated climate change is some animals and plants getting 'out of sync'. For example, the hatching of a pollinating insect may be triggered by temperature, which rises, while the flowering of the recipient plant may be triggered by day length, which stays the same.

In this case, the insect loses a food source and the plant will lose a pollinator. Not good news for plant or animal, and extinctions are possible.

An item from BBC News, kindly forwarded by Jim Croft, gives an chilling example of a more direct plant-animal interdependence - i.e plants and animals that need each other! - in New Zealand. In this case the two are out of sync because we (humans) brought in pest animals that killed the pollinators.

You can play out this kind of scenario with climate change too, and it provides a good response to the question: who cares if one species goes extinct? The answer is: another species. And if you keep asking the question, that species may end up being your own...

But back to New Zealand. According to the journalist Neil Bowdler, "scientists have linked the modern-day decline of a common forest shrub with the local extinction of two pollinating birds over a century ago".

The birds in question are the Bellbird and Stichbird, and the plant a forest shrub called the New Zealand Gloxinia (Rhabdothamnus solandri). The all live, or used to live, in the northern part of the North Island.

Rats and stoats introduced into New Zealand in the late ninteenth century (to control rabbits) killed the two bird species on the North Island. A third pollinating bird species, the Tui, now spends its time higher in the forest canopy away from the orange flowers of the Gloxinia.

The scientists could compare this mainland situation with that on nearby island bird sanctuaries where the birds were birds were still present. As expected, pollination and resulting seed production were dramatically lower (84%) on the mainland. As a result there are half as many juvenile plants per adult plants on Norht Island compared to the sanctuary islands.

Professor Dave Kelly, from the University of Canterbury in New Zealand, is quoted as saying "This plant is in trouble but it's a slow motion disaster. It hasn't been well pollinated for about the last 140 years..."

In a country where half the land birds have become extinct on the main islands, many other New Zealand plants are likely to suffer in the same way.

My new boss (as of April) at the Royal Botanic Gardens Kew, Professor Stephen Hopper, is quoted as saying the work was an elegant piece of research which 'highlights the cascading effects of extinction'.

He also comments on the long lag time between the birds going and the plants feeling the effects. Steve is not surprised, saying we know little about the longevity of woody plants and tend to think that because there are big old trees in the landscape everything is fine.

In this case the extinctions were caused by feral animals. Next time it might be changes to the climate, which themselves could favor feral animals, or plants. Or it may be that the plants and animals survive but are out of sync.

We need to understand much more about how our natural ecosystems, about what makes them tick. We might even need to wind them up again with the addition of plants and animals sourced from seed banks and zoos.

Rohrerbot said…
I love reading your blog. You have a lot of interesting and thought provoking information. All of it is tragic and in the end, which we won't see, people will only understand and by that time it'll be too late. Or maybe not. But it's going to take a world to band itself together and not everyone is on the same page....and the population keeps getting larger. One can only imagine what the world will look like in one hundred years from now....
10:25 am, February 06, 2011