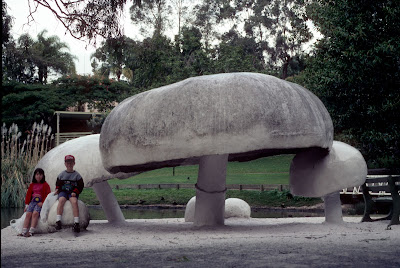 We are used to seeing the occasional large mushroom or toadstool in our garden. I’ve seen pictures of Macrocybe titans (‘titan’ means big, like the giant Titan Arum flower from Indonesia) on the internet that seem to be about a metre tall, apparently weighing in at 20 kg.

But a six metre high fungus? We need to go back a few millennia. Scientists in the UK discovered fossilised trees from one of the first forests on earth, dating back nearly 400 million years. These trees emerged from a world of early plants barely a few centimetres tall.

But not everything was small. In this ancient forest near Rhynie in Aberdeenshire, there were what the New Scientist writer James O’Donoghue described in 2008 as ‘featureless columns standing up to 8 metres high and a metre wide at the bases’.

When similar structures were first discovered, in Quebec, they were thought to be the trunk of a conifer tree. It turns out they are not made of wood at all. They are giant fungi. By measuring carbon isotopes, scientists can find out how an organism gets its food. In this case (reported in the journal Geology, volume 35, pages 399-402), it was clearly from rotting material.

Some of these giant fungi, called Prototaxites (a name given to them when they were thought to be a conifer – Taxus is the botanical name for the Yew) were living off bacteria, algae and lichenised fungi. So ferns, conifers, flowering plants and the like (the vascular plants) hadn’t really conquered the land when these giant fungi ruled the land.

Today fungi aren’t so big above the ground, but in fact they may well be still the biggest living things on earth. Work a few years ago by John Cairney and Nicole Sawyer at the University of Western Sydney demonstrated that when we see any toadstools they may belong to a single organism up to 30 m in diameter or the size of a tennis court.

And there are reports of that annoying Armillaria fungus penetrated through 15 hectares of soil and weighing something like 10 tonnes. Maybe not the species that causes Armillaria root rot in our gardens but you see why fungi can be so difficult to control.

Image: Even these giant (concrete) mushrooms pale in comparison with the 8 metre high fungi from 400 million years ago. *This posting is from the Radio Archives (March 2009).


Postscript: Or is it a liverwort! See http://coo.fieldofscience.com/2010/02/prototaxites-giant-that-never-was.html (thanks Pat!).
Email Post
Reactions:

Anonymous said…
This comment has been removed by a blog administrator.
2:05 pm, February 27, 2011

socialpa said…
Why should Armillaria be controlled? In ecosystems it is important to keep balance. Paul Stamets talks about the possibility of a natural cycle that could occur, turning forests into pastures and vice-vera.

This could be mediated by Armillaria turning the trees back into rich topsoil. Also, the annoying fungus happens to be the largest organism on the planet and I think it deserves a bit more respect than you show it.
2:06 pm, February 27, 2011

Talking Plants said…
A fair point, about seeking a balance between pathogens and their hosts. I agree that in certain circumstances we should care for and conserve Armillaria species as we do for any organism. In others it may be out of balance - like any plant or animal - and if we value the host more we may need to control it (e.g. if a fungus like Myrtle Rust comes to Australia from overeas, as it has now done, and threatens to kill many native Australian plant species). Natural or garden systems will reach some kind of equilibrium in most cases but we may lose many cherished organisms along the way.