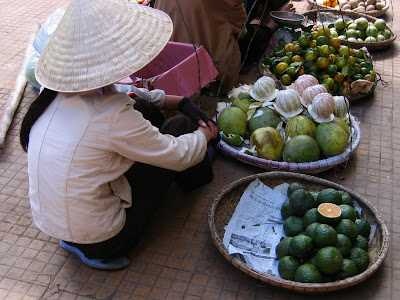 In an article in the Sydney Morning Herald’s Good Living magazine a while back, there was a statement I found odd. Cumquats, it was postulated, are not citrus fruits because they have 3-6, rather than 8-15, segments.

I’d always considered any fruit from a plant vaguely related to a lemon or orange a ‘citrus’. The family as a whole, the Rutaceae, includes a lot of things I wouldn’t called a citrus – such as the native boronias and correas – but the fruit of anything in the genus Citrus, or close to it, I would have happily have called a ‘citrus fruit’.

In fact back in 1944, Citrus and five other genera were described by as the ‘true citrus fruit trees’. This grouping included pretty much everything in the family Rutaceae producing fruits that were orange or yellow and packed with little bags of juice, including cumquats.

More recent work has shown all six genera are in fact better classified within Citrus. There are now about 25 species of Citrus, half of these from Papua New Guinea, New Caledonia and Australia.

Of course there are plenty more weird and wonderful fruits produced by the hybrids and cultivars of Citrus. In our markets there are the large fruits like pomelos and oranges – as well as the hybrid between these two, the grapefruit – through to the usually smaller lemons and limes.

There are freakish fruits like ‘buddhas fingers’. And the charismatic chinotto, the small and bitter fruit giving chinotto, the drink, its zing. Although the ingredients of the Campari aperitif are secret I suspect there is a little chinotto rind in there as well – it’s widely accepted some kind of ‘citrus’ peal is in the mix.

Most ‘citrus fruits’ start off green and ripen to orange or yellow colours, although not always completely. I was intrigued in Vietnam to see what was locally called the Cam Sanh, or King Madarin, being sold green in the south and orange in the north. I gather this is due to climatic differences in the two halves of the country, with the fruit not fully ripening in the more tropical south.

But back to segments and classifications. It’s true cumquats have fewer segments than the other fruits I’ve mentioned, and they used to be classified in their own genus Fortunella. The calamondin is presumed to be a hybrid between the two genera, or similar ones, and has 9-10 segments, and its scientific name – XCitrofortunella – reflects its presumed origins.

But the cumquat is now a bona fide Citrus, albeit in a distinct category called the subgenus Fortunella. This closer relationship between things like oranges and cumquats makes more sense given the propensity for them to hybridise.

Even when cumquat wasn’t a member of the Citrus genus it could have been called a ‘citrus’, and in any case, we don’t want to have to call the calomondin a ‘half citrus’.

Image: Pomelo and Cam Sanh for sale in a market in Dalat, in central Vietnam. *This post is from the Radio Archives (July 2008).
Email Post
Reactions: