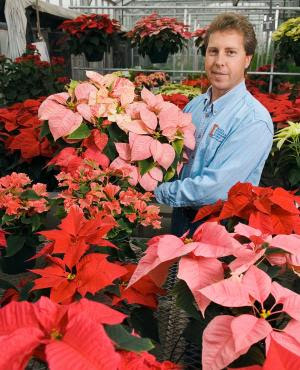 It's summer in Australia, and poinsettias are in full bloom. Well, only if bought fresh from nurseries.

Poinsettias are a species of Euphorbia – we’ve talked before about the succulent euphorbias from South Africa, but this one is native to Mexico.

In the wild they grow tall and narrow, up to 10 m high in some cases, but the garden varieties are dwarfed and branched due to the presence of a phytoplasma – a kind of bacteria that grows in the veins of a plant. This bug often causes stunting problems in commercial crops but leads to a desirable bushiness in this case.

In mid-winter in Australia, a garden poinsettia produces red or pink leaf-like bracts around its tiny flowers. The amount of colour change in these bracts depends on their exposure to sunlight, or rather lack of exposure. They need long 'dark periods' for about three months before they flower.

Northern Hemisphere gardeners report that interrupting the ‘long night’ by even flashing with a torch during October through to December may stop the leaves changing colour.

But hang on, you ask, why do we have flowering poinsettias in nurseries around Christmas? You just need to manipulate their environment. Glasshouses are set up to provide artificially long nights and the poinsettia thinks its winter.

But plant propagators want to manipulate this plant even further. At the University of Urbana, in the USA, the latest achievement is a marbled pink poinsettia.

Last time I looked the new variety didn't yet have a name, but it is a natural mutation of a variety called ‘Premium Picasso’. The bracts are described as having ‘an unusual almost watercolor wash of pink, red and white’.

This mutated variety is called a ‘sport’, something that would be very difficult to achieve just from cross-pollinated poinsettias. Before it could be sold in nurseries, the sport had to reproduced with regularity in the greenhouse.

In the report I saw the current plant was still unstable genetically – some of the bracts were nicely mottled while others were a single colour or only mottled in part.

For now, enjoy your single-coloured pointsettias at whatever time of year you can get them.

Image: The Premium Picasso sports, from ScienceDaily (photo: UIUC-ACES-ITCS: Riecks). *This posting is adapted from the Radio Archive (May 2008).
Email Post
Reactions: