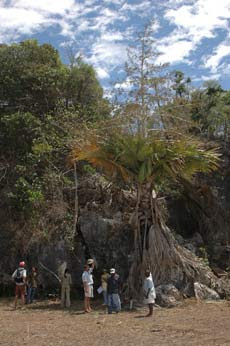 Palms can live long lives – we have some more than 150 years old in Sydney's Royal Botanic Gardens. A few, however, live (relatively) fast and furiously, then die.

We had a good example in the First Farm beds where a senescing Fishtail Palm (Caryota urens) had been flowering since 1997. This species usually grows for about 20 years, flowers for another 10 years, then fades away over a few years. The flowers open from top to bottom, and the last bunch (the lowest) finished a year or so ago and the plant is now no more.

We have another species of Caryota in the Palm Grove, opposite the aquatic plant tanks, that began flowering in 2008.

As I reported in the Friends of the Gardens magazine The Gardens, in 2008, a palm discovered in Madagascar seems to be one of the most self destructive palm ever found.

Tahina spectabilis is a giant of the palm world, reaching 18 m tall, with leaves to 5 m in diameter. After an as yet undetermined number of years, the palm bursts into massive flower at the top of the stem attracting swarms of insect and bird pollinators. By the time the fruits are ripe, the plant collapses, literally.

The palm was discovered by local cashew farmers who posted photos on the internet, exciting the interest of palm specialists at Royal Botanic Gardens Kew (my new home in April). DNA analysis confirmed the genus belongs to a group of palms previously known only from the Arabian Peninsula, Thailand and China.

There are only 100 or so of this palm surviving today, at the base of limestone hills in the mostly hot dry north of Madagascar, but in fertile soil that is periodically flooded. The limited habitat, small numbers, and the fact it seems to grow for many years without producing flowers and seed, make conservation difficult.

Part of the strategy will be to propagate the palm in botanic gardens in Madagascar and elsewhere. Seed is being held and germinated in the Millenium Seed Bank at Wakehurst Place, part of Royal Botanic Gardens Kew.

We already have some stars of the palm world. Our prize exhibit is Pritchardia maideniana. This palm species was first described in 1913, from two mature specimens growing in these Gardens, and named in honour of Joseph Maiden, Director of the gardens between 1896 and 1924.

The palms from Kona, Kau and Puna, grow around brackish water ponds from sea level to 700 m in elevation. They were described at the same time as Maiden’s Pritchardia, but assumed to be a different species. Donald Hodel from the University of California compared collections of these plants with the material growing in the Royal Botanic Gardens in Sydney as well as preserved herbarium species kept in the local herbarium.

Hodel is unsure if these remaining populations are in fact natural or remnants of cultivation. It may be that this fascinating palm is still only known from planted specimens. I think all plants growing outside Hawaii came from Sydney's Royal Botanic Gardens.

At the southern end of the formal beds you can see two grand Chinese Fan Palms (Livistona chinensis), imported in tubs from Reunion Island in 1840. These palms obviously enjoy long and leisurely lives.

Image: Tahina spectabilis from the Royal Botanic Gardens Kew website, where you can read more about the plant and its seed. *This posting is from the Radio Archives (October 2008).
Email Post
Reactions:

Jim said…
The most important, and perhaps the best known, one-shot-wonder in the palm world is probably the hapaxanthic monocarp (or monocarpic hapaxanth - that's what botany is really for: to create big words to impress people at dinner parties), Metroxylon sagu, sago.
2:09 pm, January 31, 2011

Talking Plants said…
Monocarpic Hapaxanth (or for that matter Hapaxanthic Monocarp) sounds a little tautological but if you can get away with two big words why not? And of course botanical pedantry, that worthy field of academic pursuit, would say there are subtle difference between fruiting once and flowering once. But yes, the sago. And it tastes good (with lemon).
2:16 pm, January 31, 2011

Rohrerbot said…
This is interesting information. Thanks for sharing.
4:39 pm, January 31, 2011