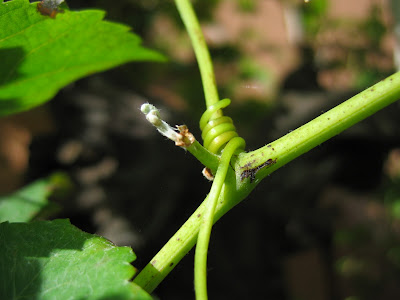 Most people will have heard of the Coriolis Effect, and the supposed influence of the rotating earth on the way water gurgles down our drains.

In a large circular container, with a small outlet hole, you may indeed be able to observe water swirling clockwise in Australia and counterclockwise in the Northern Hemisphere due to this effect. However mostly anything goes.

But what about ‘twiners’, plants that curl around other plants and trellises. Do they twine one way in the Northern Hemisphere and the other in the Southern? And has this got anything to do with the rotation of the earth?

The great Charles Darwin suggested that the direction of twining was most likely determined by a mechanical response when the twiner first makes contact with its host. I’ve also seen Darwin cited, but not been able to confirm, as stating that climbers in the Southern Hemisphere twine counterclockwise, the opposite to those in the Northern Hemisphere. (And also opposite to a laboratory controlled experiment with water draining from a bath!)

Many gardeners in Australia swear that the direction of twining will tell you whether you have a local or overseas (Northern Hemisphere) species. The assumption here is that basis for twining is genetic and a plant will retain its twining direction wherever it grows.

One Australian native, the Scrambling Lily (Geitonoplesium cymosa) has been cited as an exception to the rule in this country. And the Honeysuckle (Lonicera), from the Northern Hemisphere, is said to twine counterclockwise...

So what we need is some science. Angela Moles, from the Evolution & Ecology Research Centre at University of New South Wales, and colleagues from Cairns and New Zealand, examined twiners from around the world and scored then as left- or right-handed.

Here the terminology gets confusing. A right-handed corkscrew (i.e. one that rises from left to right on the side you are looking at) is generally considered to turn clockwise, and if you look at it from either end this is indeed what it does. However in the biological world, right-handedness is sometimes equated with anticlockwise due to details of growth at cell level, or an analogy with the ‘right-handed rule’ describing the direction of magnetic force in relation to current. I can’t quite get my head around either of these I’m afraid.

In any case, the results are fascinating no matter how you define the twining. Angela and her team found that 92% of stems twine in a right-handed, or in her terminology an anticlockwise, direction and twining direction was not related to latitude, hemisphere or plant family. Angela says she surveyed plants in pristine habitats and most if not all were likely to be native.

The only hypothesis that seemed to make sense, but it still needs testing, is that most plants twine in one direction because of fundamental asymmetry, or ‘handedness’, in the chemical reactions leading to cell wall formation and growth. Interestingly, snail shell spiraling shows a similar pattern with over 90% turning in one direction.

Angela’s research didn’t focus on species but she found no correlations with plant families so it seems unlikely twining in one direction follows a particular evolutionary pathway. One intriguing discovery was that in the Dilleniaceae, including our native Hibbertia, some individual plants swap between clockwise and anticlockwise.

Clearly there is more science, and lexicography, to do.

Image: A tendril of grape growing in Sydney's Royal Botanic Gardens, confidently twining to the right, or is it the left? *This posting is from the Radio Archives (June 2008).
Email Post
Reactions:

Phil said…
Fascinating. I remember seeing some papers a few years back which provided evidence at the cellular and sub-cellular level, where mutants of Arabidopsis (which doesn't twine,had been produced that developed twining-type growth. Sub-cellular investigation suggested that the mutations affected the orientation of the microtubules that control cell wall development after cell division - can't remember the exact details but it did indicate that a genetically-controlled asymetry in cell division might be the underlying explanation for coiling and its alternative directions.
7:26 pm, January 20, 2011

Jim said…
Interestingly, yams (Dioscorea) twine, some species to the right, some to the left. It is diagnostic enough to be used in identification keys.
11:52 pm, January 20, 2011

Talking Plants said…
Thanks Phil and Jim. I'm surprised this hasn't received more serious scientific attention. I think it's fascinating, particularly as it appears to be genetically determined in some plants and not in others.
7:20 am, January 21, 2011

Barbie from office plants said…
This is really a knowledge gaining post and all thanks to Google search engine get me on here.
I loved reading your post and added to the favorites. The views you tried to put up was clearly understandable.
7:56 pm, February 18, 2011