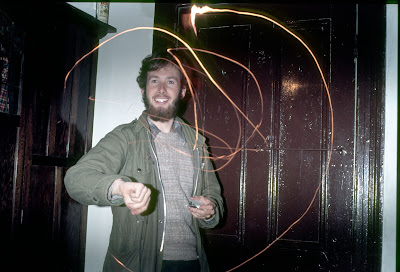 I'm guessing the idea of introducing genetic material into a tree to make it glow will horrify many people. And that it was an entry into the annual International Genetically Engineered Machines (iGEM) comptition won't help.

An alternative is to paint your tree gold, but I'll come to that later.

This is news I missed while converting archived radio chats into bloglets (a steady stream of which I'll continue to post). The stories come from the 27 November 2010 issue of New Scientist.

While there are various life-forms on Earth that produce light, mostly the light is very weak and doesn't pass the 'read a book by' test. Undergraduates from the University of Cambridge took genes that make fireflies glow and luminescent marine bacteria luminesce, and fiddled around with them to increase the amount of light produced.

They created what they call BioBricks, ready to be inserted into other life-forms. For the competition they used that well known bacterium Escherichia coli, better known as 'E coli', as their glowing guinea pig.

Frank Swain at New Scientist reports that a range of coloured lights were produced, and a culture about the "size of a regular wine bottle gave off enough light to read by". While they were inspired by the idea of luminescent trees they weren't able to crank up the technology to this level for the competition.

One of the technological challenges was to keep a compound called luciferin staying alight. Luciferin is a generic name for a range of chemicals that bind with oxygen to produce oxyluciferin and light. (My understanding is that what we call fluorescence and phosphorescence is different - it's when light is absorbed and its energy used to produce more light, rather than a chemical reaction.) But once luciferin is converted into oxyluciferin, it can no longer produce light. So our Cambridge students found a way to recycle the oxyluciferin, turning it back into luciferin.

The team speculate about bioluminescent plants for people living in areas without mains electricity. However they accept that light globes do a pretty good job and it would not be cost effective to replace them with glowing trees. Still, they think 'biolight' might have a special appeal to some people.

One of the students, Alexandra Daisy Ginsberg, says that 'If you have to feed the light and look after it, then it becomes more precious'.

And if that's not weird enough, researchers in Taiwan dipped an aquatic plant called Bacopa caroliniana into gold nanoparticles turning it into a red-glowing plant. The gold diffuses into the plant cells and under ultraviolet light the electrons in the gold get all excited and emit light.

Yuriko Nagano reports that this violet-blue light then apparently makes the chlorophyll (the green stuff in leaves that absorbs sunlight for photosynthesis) flouresce red.

The effect lasts from two weeks to two months. It's not reported whether enough light is produced to read a book, or perhaps a short story.

Image: Haven't we all done one of these pictures. This is me (yes I'm afraid so), emitting light from a match in 1981.
Email Post
Reactions:

Rohrerbot said…
Sounds like Avatar:) Still...having a tree that lights up would be really unique. I think a lot of people would be fascinated by this. Really cool post.
4:45 pm, January 31, 2011