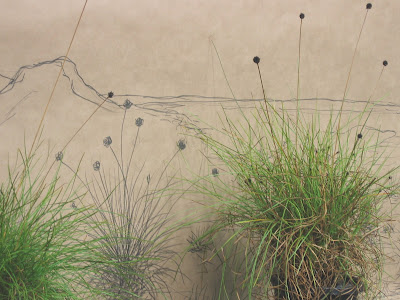 Button Grass is not a charismatic species but an interesting one. A couple of years ago I attended a two-day workshop on the Button Grass Moorlands of Tasmania, and came away wiser and mildly attracted to this plain plant.

As I knew already, Button Grass is a sedge rather than a grass. Sedges are usually found in swampy or seasonally wet soils. They are superficially like grasses but subtle differences in their vegetative and reproductive structure.

Moorlands are typically thought of as cold, bleak expanses of heathy vegetation over acidic, peat soils. They can also be quite romantic, in a cold, often bleak, way.

The Button Grass Moorland is a treeless vegetation typically dominated by Button Grass (Gymnoschoenus sphaerocephulus). It seems to be a human-created landscape, over 40,000 years old.

Aboriginal people regularly burnt the area, favouring button grass and not the heathland shrubs and trees. Even the classic moorlands of Britain are controlled by clearing and burning.

Excuse this diversion into zoology, but the Tasmanian moorland is home to a fascinating animal, the terrestrial crayfish. The Tasmanian crayfish is the largest inland crayfish in the world, and has an unusual way of living, burrowing into peat-like soil away from streams and lakes.

There are 34 different species of crayfish in Tasmania, most of them restricted to the island and many found in the Buttongrass Moorlands. These ‘terrestrial’ crayfish dig down to the watertable, or else use their chambers to catch run-off. They aerate the soil and are part of the complex buttongrass system.

Button Grass Moorland is big in Tasmania – with half a million hectares covering about two-thirds of the World Heritage Area in the south-west – but Button Grass occurs up the east coast of Australia. We have some in the Blue Mountains around places like Blackheath and Katoomba, south around Carrington Falls and I think closest to the CBD at La Perouse.

As a vegetation type it’s a bit hard to define so it’s arguable whether we have true Button Grass Moorland or just some vegetation with Button Grass. The extensive tracts in Tasmania are the only vegetation type in the world dominated by a tussock-forming sedge. The peat-like soil is formed by sedges and shrubs rather than Sphagnum moss, although the latter does occur in the same areas.

The soil is acidic and nutrient poor – the Button Grass itself has the lowest level of phosphorus recorded in a plant. (Phosphorus is needed to build DNA and for many essential biochemical pathways in plants, and is typically limited in Australian soils – hence the widespread addition of super phosphate for many years.)

It’s hard to replicate these conditions in the home garden of course, but then Button Grass is not the most attractive specimen except in flower (when the white buttons bobble in the breeze) and of course in the moorlands themselves.

You can see local Blue Mountains Button Grass at Mount Tomah Botanic Garden, in the Bog Garden or Australian Woodland.

Image: A potted display of button grass, with illustrated background. *This posting is from the Radio Archives (November 2007).
Email Post
Reactions: