Pretty in pink – the kurrajong and relatives* 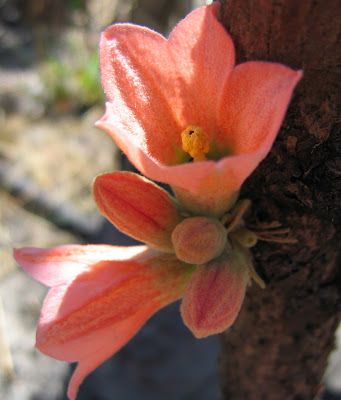 I talked to Simon Marnie before about Bottle Trees, and how the Queensland Bottle Tree (not to be confused with a Boab) is a kind of Brachychiton, called Brachychiton rupestris.


There are other well-known members of this genus, such as the Illawarra Flame Tree (Brachychiton acerifolius) and the Kurrajong (Brachychiton populneus).

You can see these and a bunch of other Brachychiton species in the Kurrajong Arboretum at Mount Annan Botanic Garden, and dotted around our other two botanic gardens. An arboretum is a collection of trees, just like a botanic garden is collection of plants – including trees.

There are 30 species of Brachychiton in Australia and one in New Guinea. The Australian species are found across much of the country but mostly in tropical and subtropical areas.

Jean Dennis, a friend and neighbour of my mother who lives in Castlemaine in central Victoria, has set herself the task of painting a portrait of the 30 Australian species, and perhaps even the New Guinea one. I believe she is close to getting them all although a couple are rare and hard to locate, and she’s is up in the Northern Territory as we speak tracking down flowers to illustrate. Look out for the book!

I can see why she was attracted to Brachychiton. All species have showy flowers, usually pink or red in colour, but also yellow and other colours. A lot of the species flower now and into summer so it’s a good time to visit the arboretum.

The first thing you’ll notice is plenty of Brachychiton bidwillii (named after John Bidwill, one of my predecessors here at the Botanic Gardens Trust) beside the road as you drive through. It’s commonly called the Little Kurrajong in its native habitat from just above the coastal NSW border up into northern Queensland. Like many of the brachychitons, it drops its leaves before flowering so the blooms are particularly vivid and presumably easy to see for its pollinators.

If you stop and take a closer look you might see a single plant tucked way behind the bidwillis called Brachychiton ‘Griffith Pink’. This is a hybrid between what’s called the Lace Tree or Scrub Bottle Tree (Brachychiton discolor) and the Kurrajong.

It’s a small tree with leaves a bit like a maple, but it packs a punch when covered in deep pink flowers. It can flower any time between November and March, but it looked great last November so now is a good time to visit.

Finally, I want to mention a common species in the tropics of Australia, one that always surprises me when I’m walking through the tropical woodlands of the north, Brachychiton megaphyllus. It’s often a scraggy tree, with just a few flowers, but as always a treat to see. I’ll put a picture of this species taken at Litchfield National Park on my blog and the ABC website.

*This Passion for Plants posting will also appear on the ABC Sydney website (under 'Weekends' or search 'gardening'), and is the gist of my 702AM radio interview with Simon Marnie on Saturday morning, between 9-10 am. I'll also include a version of this story in the next issue of the Friends of the Gardens magazine, The Gardens, for those not 'on-line'.

Sean Freeman said…
Thankyou for a lovely post reminding us about a much underutilised native species..anyone who visits Roma in western Queensland will leave there wondering just why other towns have not used Brachychiton in their street scapes more.

Many rural towns and even some cities have incorporated the more famous Flame tree Brachychiton acerifolius into plantings but it is a shame that the many very very beautiful other species are not more in demand. They certainly are hardy and resiliant and bring splashes of seasonal colour that brighten your day no matter what the weather might be doing.
8:02 am, November 06, 2010

Talking Plants said…
Thanks for that, I'm glad there are some Brachychiton fans out there! They are spectacular trees.
8:31 am, November 06, 2010

Ron Mylar said…
This BlogSpot show the various talking plants with pretty in pink. And also I talked to Simon Marnie before about Bottle Trees.
11:27 pm, November 20, 2010

Bort said…
Keep an eye out, Richard Carter ex-ANU is submitting his PhD thesis on the evolution of the Sterculias, with hopefully publications to arise from...
3:42 pm, May 31, 2011