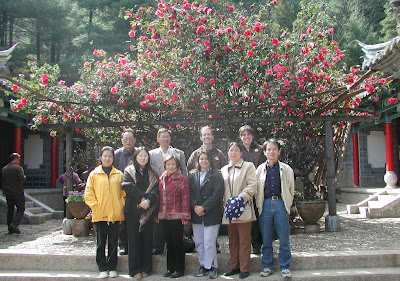 I think the Camellia should be granted status as an 'honorary' Australian plant. Although native to Asia, cammelias are tough and non-invasive (i.e. don't escape our garden fences) in Australian gardens. Australians have been amongst the leading world breeders of new cultivars. And in my mind at least, they are attractive in leaf and flower, even within an otherwise 'Australian plant garden'.

In 2007 I spoke on radio with Simon Marnie about this honorary Australian plant (there, I've done it, status granted, at least in New South Wales!). I said that one in twenty of the more than 20,000 camellia cultivars were bred in Australia.

Breeding in this country began in the mid 19th century with William Macarthur at Camden Park Estate, one of our horticultural pioneers (at the same time, in town, Charles Moore was creating a botanic garden on the harbour).

William travelled widely, and introduced many garden plants to Australia, including the camellia – and less constructively, the African Olive as a hedge plant.

During the 20th century, though, camellias took a back seat as roses captured the public imagination. By the time the camellia made its comeback in the 1930s, almost half the Australian cultivars were lost – although a flurry of breeding in the last 50 years has resulted in another 550 registered cultivars.

Most cultivars we grow are from three species, C. japonica, C. sasanqua and to a lesser extent C. reticulata. The sasanquas are well suited to Sydney and they were coming into flower when I spoke about this on air (March); now the japonicas have just finished their spring flush.

Camellia flowers are mostly white, pink or red, but there are a few yellow-flowered species and one rediscovered recently in Vietnam with purplish petals.

In fact there are about 300 species of camellia, 80% of them coming from China, but also some from nearby countries like Vietnam and Japan. There are species with leaves only a cm or two long, and some up to 55 cm (nearly two-foot long!).

Most people know that tea comes from Camellia, both the common fermented black tea and the unfermented Chinese green tea come from Camellia sinensis, variety assamica or sinensis. Surprisingly, there is probably as much camellia grown in China for seed oil (Camellia oleifera) as there is for tea.

Image: This 500 year-old tree from Lijiang, China, is said to produce ten thousand flowers every year (I'm standing second from the right, in the back row; 2004). As I noted at the top, this post is largely from the Radio Archives (March 2007); you can read more about camelias in other postings.
Email Post
Reactions: