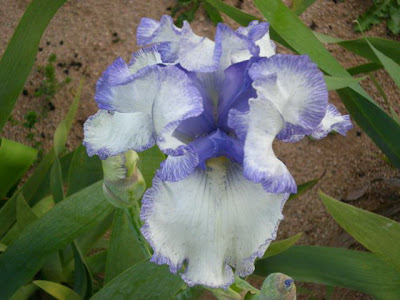 On Sunday (10 October 2010), State Governor Professor Marie Bashir AC will launch a Tall Bearded Iris called ‘Elizabeth Macquarie’ in Windsor, one of five Macquarie towns in New South Wales. The launch is part of a year-long celebration of the bicentenary of Elizabeth and Lachlan Macquarie arriving in Sydney.

This is a new Iris cultivar, bred by Graeme Grosvenor, considered the leading hybridizer of irises in Australia and winner of many prizes for his offspring. Graeme has on his shelf the Premio Firenze from Florence, awarded for the best Tall Bearded Iris in the world.

The story behind this new hybrid gives you a sense of what plant breeders get up to. Graeme based ‘Elizabeth Macquarie’ on ‘Rhonda Fleming’, which he describes as having ‘a lovely form but a slow increaser and a very ordinary grower’. It received rave reviews when first released in the USA, but quickly fell from favour as its poor performance became obvious.

So Graeme crossed ‘Rhonda Fleming’ with a cultivar called ‘Zip It Up’ to fix the growing problem and to get branching of the flowering stem. There was also the outside possibility of getting what iris breeders describe as ‘pure blue on white plicata’ – that is, the white is flecked and marked with blue. 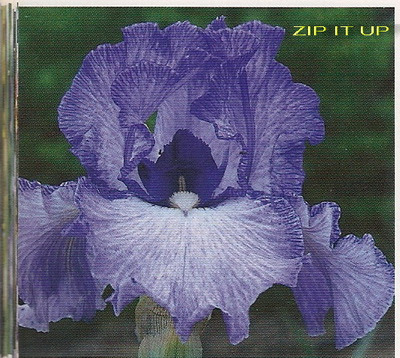 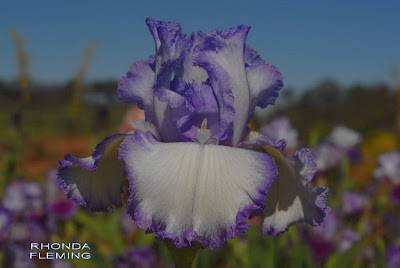 As Di Cox, a keen iris grower, put it to me, Graeme struck it lucky and got the lot in the first generation. The bloom also has a nice sweet fragrance.
Apart of planting out in Macquarie towns, the plants will be available for sale after the launch in Windsor tomorrow. I think our Friends of the Gardens may have some for sale.

The iris is a plant closely associated with Elizabeth Macquarie. The story goes that while accompanying Lachlan on his vice-regal tours of inspection of the colony, she would distribute iris rhizomes to the settlers. It’s thought that blue and white irises growing beside Old Sydney Road near Campbelltown are the result of her gifts.

For more information on Macquarie events this year see the website devoted to the 2010 celebration.

Image: At the top, the new 'Elizabeth Macquarie’, bred from the two cultivars illustrated in the middle of the post. Images provided by Di Cox - thanks!

*This Passion for Plants posting will also appear on the ABC Sydney website (under 'Weekends' or search 'gardening'), and is the gist of my 702AM radio interview with Simon Marnie on Saturday morning, between 9-10 am.
Email Post
Reactions: