Biggest flower in the world blooms (again) at Kew Gardens 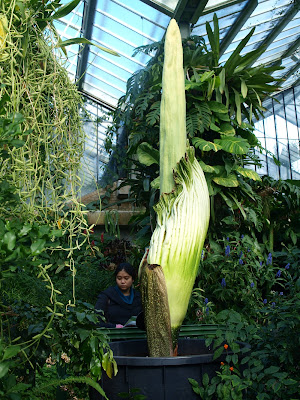 This is the closest I got to seeing one of Kew's Titan Arums (Amorphophallus titanum) in full bloom. They get on average two or three flowering a year, making it almost as predictable as rain (although to be fair, yesterday was a sunny, if crisp, day).

I'm passing through London briefly and I took the opportunity to check out one of my favourite plants. There were a couple of people wandering by when I saw it, but no queues and no headlines (apart from the very nice Twitter updates - @kewgardens - and website feeds).

In Sydney we've had three public showings of the Titan Arum flower and it hasn't yet shown any signs of losing it's star appeal. While that day may come, I still get a thrill out of every bloom.

I have to say here that Kew's is definitely bigger than ours. As the t-shirt we printed the first time the Titan Arum was in flower, in 2004, says ‘Size really does matter’.

Out biggest flowers have been about 1 m tall, while the biggest ever recorded was 2.9 m.

The Titan Arum only occurs naturally in Sumatera, in Indonesia. It consists of a giant tuber weighing up to 100 kg, a giant (divided) leaf up to 6 metres tall which lives about a year and then dies back to the tuber, and then every now and then, a massive flower that looks like a deformed banana in a pleated, deep red skirt.

Here is a picture of an impressive leaf in a pot, just behind the almost flowering Titan Arum in the Princess of Wales Conservatory: 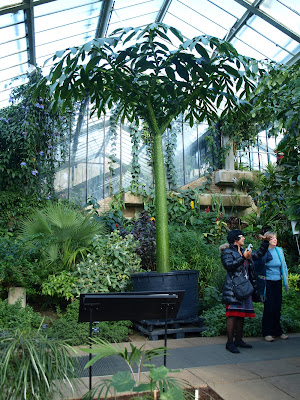 Just in case you are searching the web for the biggest flower, another contender is Rafflesia, also from Indonesia but more widespread through tropical Asia. I posted a little about this plant recently. The species with the biggest flower, Rafflesia arnoldii, has flowers up to 1 metres across and weighing 10 kg.

The Rafflesia flower is more like your typical flower, albeit with great big fleshy red petals. Otherwise it is far from typical – it has no roots and no leaves, just some fine threads that penetrate into the tissue of a rainforest vine.

So why is there some dispute about the biggest? Well the Titan Arum bloom can be viewed as a collection of tiny ‘flowers’, so some botanists call it an ‘inflorescence’ – like the flower head of a banksia. Others consider the ‘flowers’ so reduced in size and complexity, and the whole structure so much like a single bloom, they classify it as a single flower. For plant scientists it is an interesting discussion about the origins and functions of flowers, for most people though it is semantics.

However you define it, big flowers often produce big smells. Both the Rafflesia and the Amorphophallus smell like rotten meat. This and their flesh-like colouring attracts flies to pollinate these giant blooms. It also explains one of the common names applied to both – the Corpse Flower.

During my visit yesterday there were not traces of foul odour so I expect it may be a day or two before the bloom opens fully. But I've been wrong before...
Email Post
Reactions:

j fothergill said…
The arum is actually lots of flowers in an inflorescence. You'd have to chop it open to see that. The Rafflesia is a single flower though. (I had the pleasure of seeing one in Borneo, and yes, it smells!)
4:42 am, October 30, 2010

Talking Plants said…
See above (third paragraph from the end). It's a matter of definition and interpretation whether it's a collection of flowers or one very large flower with lots of little floral bits. Either way, an impressive achievement! I'm very jealous of you having seen a Rafflesia in flower - something I look forward to doing one day...
8:11 am, October 30, 2010