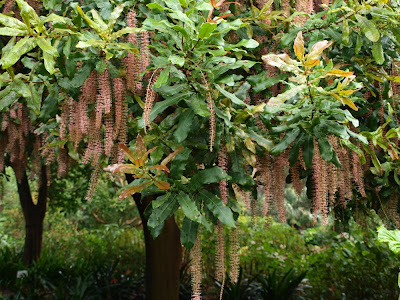 Last year I was invited to a celebration of the world’s oldest cultivated macadamia tree, planted 150 years ago in Brisbane’s City Botanic Gardens. Unfortunately I couldn’t attend the celebration but we have a pretty elderly specimen of Macadamia here in the Royal Botanic Gardens.

I’m not sure what species of Macadamia the ‘Walter Hill Tree’ in Brisbane is, but there are two widely in cultivation and used to produce macadamia nuts. Our one is Macadamia tetraphylla, producing festoons of tiny purple flowers in September.

The other is Macadamia integrifolia, with leaves in whorls of three rather than four. Both species are native to rainforests in southern-eastern Queensland, with Macrodamia tetraphylla extending down into New South Wales.

Although macadamia nuts were harvested and eaten by local Aboriginal people, as is well known, they were first brought into commercial cultivation in Hawaii, in 1882. Apparently Australian botanists promoted their potential as far back as 1900 but it wasn’t until 1963 that Australia entered into production.

The invitation from Queensland said the Walter Hill Tree represents the birth of Australia’s macadamia industry now worth over $100 million annually and earning over $70 million in exports. The industry is as old as the State, now 151 years.

According to the media release, the macadamia nut has been called Queensland’s Gift to the World, by Queenslanders, and the King of Nuts by those around the world who know and love it.

The macadamia nut is the only native Australia food to be internationally traded and is currently exported to over 40 countries.

There are other species of Macadamia in Australia, some of them quite rare, and a number of cultivars bred from the commercial species – some of these will flower twice a year, producing two crops.

By the way the name ‘Macadamia’ honours a chemist and academic from Melbourne, John Macadam. He was also Member of the Legislative Assembly for Castlemaine, a town in central Victoria, and my home town. 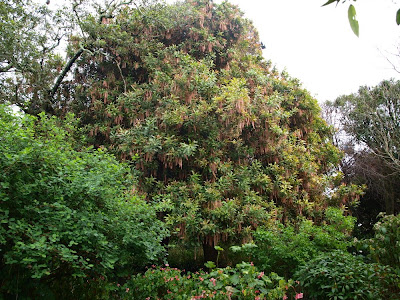 *This Passion for Plants posting will also appear on the ABC Sydney website (under 'Weekends' or search 'gardening'), and is the gist of my 702AM radio interview with Simon Marnie on Saturday morning, between 9-10 am.
Email Post
Reactions: