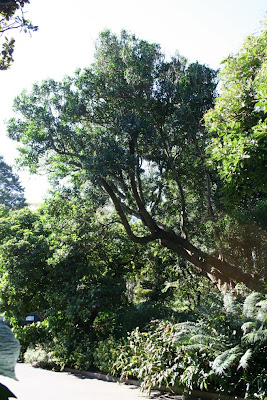 Joseph Maiden - Director of Sydney's Botanic Gardens between 1896 and 1924 - was enthusiastic about Australian plants, particularly eucalypts, but also rather fond of confers generally and anything from the Canary Islands.
You can enjoy the fruit of Maiden's plant passions, so to speak, in the plantings from his time still growing in the Royal Botanic Gardens. If you like conifers, there are plenty of Agathis, Araucaria and Pinus species.
From the Canary Island flora we have the Dragon Tree (Dracaena draco), Mirbeck's Oak (Quercus canariensis) and less well known species, Picconia excelsa.
The Picconia came to my attention recently when botanic garden consultant (and among other things the brain behind the great Alice Springs Desert Park) Mark Richardson wrote to Phil Moors at Royal Botanic Gardens Melbourne and myself to ask about our records of this species. Mark was assisting the National Arboretum in Canberra in looking for new additions to their collection.
Mark found Picconia excelsa growing at Hamilton Hume's cottage near Yass, and already knew it from Camden Park. He wondered if Hume had sourced his specimen of Picconia from Camden Park as he had done with other plants.
We looked into our database and found that the older of two specimens in the Royal Botanic Gardens possibly dated back to Maiden's time. It's growing in one of the large rectangular beds near the Wollemi Pine on the 'traffic island'. These beds themselves date back to the start of the botanic garden in 1816 but we don't know if the plant in question came originally from Camden or was sent to Maiden from overseas.
The other specimen is near the gate opposite the State Library (Morshead Fountain Gate) and was planted sometime after the Cahill Expressway separated the Domain and the Royal Botanic Gardens in the 1950s. It was probably propagated from the Maiden tree. You can get more precise information about these locations at our Tree Information site.
So what is Picconia excelsa? It's in the family Oleaceae, along with the olive (Olea), Ash (Fraxinus), Jasmine (Jasminum) and Ligustrum. The flowers are small and white, and the fruit black. In its native habitat in the Canary Islands and Portugal, it is under threat due to destruction of its habitat.
In Australia it is an uncommon planting, but I notice from my web searching there is a century-old specimen in Eastern Park, Geelong. Mark Richardson notes that it is surprsing it isn't grown more widely given its hardiness in Melbourne, Sydney and...Yass.
That said, it's a pretty ordinary looking plant albeit with quite nice glossy leaves. The photo at the top (from our Tree Information site) does justice to this ordinariness.
Email Post
Reactions: