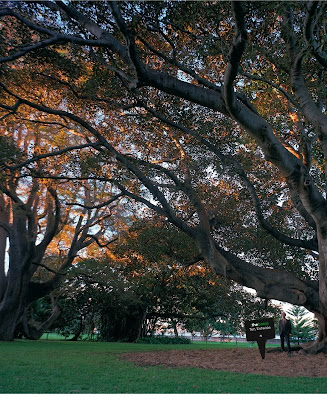 In a weekend edition of the Sydney Morning Herald early in 1935, Walter Froggatt reported on "the broadest spreading Moreton Bay figtree in Sydney, perhaps in Australia". The tree that Froggatt admires is our Children's Fig, which at the time was "in perfect condition, for it has never been pruned".
We've been unsure about the age of this majestic tree, tending to wave our arms in the air and say more than 100 years old. The discovery of this news story means we can date it with some certainly to over 150 years.
One of our ex-staff and now volunteer, Tony Martin, unearthed the Froggatt story while tracking down information for our planned bicentennial book. The book, to be published in 2016, will be all about the Botanic Gardens and its history. Working titles for chapters give some idea of its scope: Art and culture; Getting things built; Characters, eccentrics & celebrities; Crime doesn't pay; Drugs over the counter; Yes minister; Plants=Life; and so on.
Our Children's Fig will certainly feature in 'Plants=Life', all about what we call the 'living collections' - i.e. the plants. It might also rate a mention as a celebrity.
So what does Froggatt tell us on 6 April 1935, under the heading of 'The Great Moreton Bay Fig'. First he describes the tree: "At three feet above ground its rugged trunk has a circumference of 27 feet. At seven feet up the lateral branches - many as think as the trunks of the Avenue figs - grow out so closely that the trunk cannot be measured. Last week I measured its shade expanse at midday; each radius from the trunk gave measurement of 80 feet, and the circumference of the shadow was 570 feet."
In Derek McIntosh's National Register of Big Trees: Australia's Champion Trees the Children's Fig is estimated to be 24 metres (78 feet) high, with a trunk circumference of 14.75 metres (48 feet) and a crown extending 44 metres (144 feet). So it more or less doubled in bulk between 1935 and 2010.
Froggat estimates the tree to be at least 80 years old in 1935. It was already a notable specimen decades earlier: Joseph Maiden (Director 1896-1924) 'usually took his distinguished oversea[s] botanists to visit this outstanding tree'. He laments, as we do, that there are few records kept of the early plantings in the Botanic Gardens and his calculation of age is based on the following.
The tree is growing on land reclaimed from the harbour - 'from silt and sand dredged out of Circular Quay'. The reclamation finished in 1847 but the ground was not suitable for planting for 'some years', until the salt leached out.
Soon after his arrival in Sydney in 1848, to take up the job as Curator/Director of the Botanic Gardens, Charles Moore travelled to the northern rivers of New South Wales and was 'much impressed with the beauty of these Moreton Bay figtrees as shade trees'. As Froggat puts it 'it is due to his energy that we are indebted for the thousands of these trees planted in our parks and streets'. It was soon after this trip that he began planting figs around Sydney and New South Wales, including the Botanic Gardens. I should note that you will find rather more letters and articles in the Sydney Morning Herald bemoaning Moore's passion for this plant.
Froggatt, who clearly likes the Moreton Bay Fig, observes that they grow upwards when crowded together 'but given unlimited space in which to spread...we have a wonderful example of the beauty and shad that an untrammelled Moreton Bay figtree can show.'
I'm happy enough to accept Froggatt's argument that this tree was planted in 1855, or thereabouts. That would make it 155 years old this year. It remains largely 'untrammelled', although we have done some judicious pruning and now fenced it off to protect visitors from falling limbs.
There are a couple of other figs of similar bulk and spread in the Royal Botanic Gardens and Domain but the Children's Fig is certainly one of the most impressive. I'm obliged to mention that it may no longer be the 'broadest spreading Moreton Bay figtree...in Australia': the National Register of Big Trees: Australia's Champion Trees lists a Perth specimen with crown 47 metres across...

Image: A picture from last year's Sydney Magazine story about the Royal Botanic Gardens, with me as a scale bar next to the Children's Fig.
Email Post
Reactions: