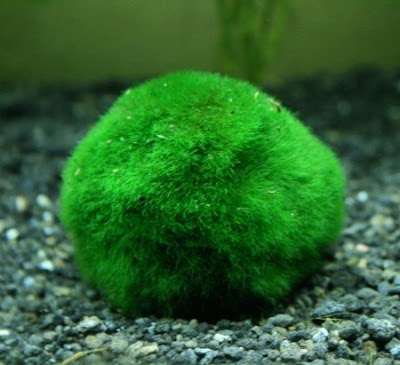 I know, it's an odd and suggestive title. Really, they are very cute.

'Algal balls' are free-floating masses of algae that roll up into round balls - they are also called 'lake balls', 'Cladophora balls' and 'marimo'.
The alga behind the balls is Aegagropila linnaei, a filamantous green alga growing in generally freshwater lakes in previously glaciated areas of Europe, but also Japan and with a few reports from North America. In Australia we have similar formations in the brackish lakes of Gippsland, in southern Victoria, produced by a different but related species. They are known there as 'moss balls', even though they are algae rather than mosses...
Each marimo (I like this name better...) consists of stiff filaments with special outgrowths to help entanglement, and formation of the ball. Moving water creates the ball shape. Marimo form in shallow lakes with sandy bottoms and some gentle wave movement.
In a paper published in Bioscience, Christian Boedeker and colleagues document a severe decline in the number of marimo over the last 30 years. In more than half of 283 locations were marimo once grew, and rolled, they are no longer present.
Boedeker also mentions that in Japan, marimo have been designated a 'special natural monument'. They have appeared on stamps in Japan as well as Iceland, and you can by marimo souvenirs in Japan, from lucky charms and toys, to cartoons. Marimo have become popular in recent years in the aquarium trade.

It seems the marimo have suffered as lakes have become more polluted, even though Aegagropila linnaei attached to rocks has not experience a similar decline. Acidification may also have an impact but has not been proven.
Following publication of this paper, Brian Whitton from the University of Durham has provided some personal observations which I hope he won't mind me summarising. His view, from studying this group of algae in the United Kingdom for many years, is that marimo has actually increased in some locations.
Where it has declined, Brian suggests a few possibilities, such as higher inorganic phosphorus (although depends, as always, on ratio of nitrogen-to-phosphorus and organic-to-inorganic phosphorus), lower calcium, competition with weedy algae such as the diatom Didymosphenia, exposed shorelines and vitamin deficiencies.
Brian ends with the observation from his Japanese colleagues that mini-marimo can be made by rolling up wads of a related species of algae (Cladophora glomerata) in the hand, with liberal addition of spit.
Image: a marimo from an aquarium products site. I'm sure they won't mind me copying their picture and then promoting their site - Badman's Tropical Fish.
Email Post
Reactions: