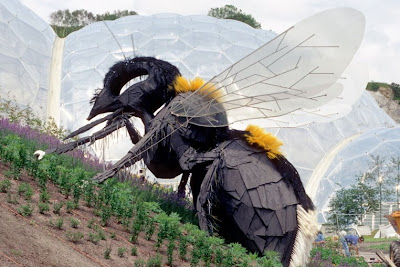 It’s generally thought that almonds contain cyanide, albeit in small amounts so that unless you eat a whole lot of them you won’t die.

In fact wild ‘Bitter Almond’ kernels contain a chemical called amygdalin, which can be broken down by enzymes in our stomach to produce cyanide. It is particularly concentrated in unripe fruits.

For this reason you shouldn’t eat (wild) Bitter Almonds or use amygdalin for medicinal purposes (amygdalin has been promoted in the past as a cancer treatment, but clinical trials have shown it to be ineffective in treating or controlling cancer).

The almonds we buy in shops are apparently free (or very close to it) of amygdalin and cyanide, so enjoy! But for pollinators visiting the flowers of an almond tree, life is not so easy. The nectar of an almond flower contains small amounts of amygdalin and it is poisonous to birds and mammals.

Scientists at the University of Haifa in Israel have been to trying to work out why a plant would risk poisoning its pollinators. Bees, rather than birds or mammals, are the most common pollen carriers so they exposed honey bees to nectar with varying concentrations of amygdalin.

Instead of being worried by the potential poison, the bees actually preferred the dosed up pollen – in fact the more amygdalin the better.

The researchers suggest two possible explanations. Maybe this chemical is an good attractant for insects so the fact that it knocks off a bird or mammal in the process doesn’t matter as long as the most important pollinators, bees, visit the flowers. Alternatively the flowers might be actively discouraging inexpert pollinators.

A third mechanism, the focus of further study for the group, is that amygdalin kills harmful bacteria and helps protect the quality of the nectar. The fact that it poisons mammals and birds is an inadvertent consequence of successfully attracting more insects over a longer period of time.

The lead scientist, Professor Ido Izhaki, points out that there are practical applications to understanding how the flowers interacts with its pollinators, particularly when, as now, pollinators are in short supply. In fact beehives from Australia are transported each year to California to help with almond pollination.
Image: A giant (unpoisoned) bee carrying pollen - a sculpture at the Eden Project in the UK.
Email Post
Reactions:

Phil said…
Fascinating. There's at least one species of Tilia that's supposed to have nectar that's toxic to bees - see http://apps.kew.org/trees/?page_id=131
which seems strange for a bee-pollinated tree

Talking Plants said…
Thanks for those references - very interesting! Yes odd that the Tilia seems to target its presumably best pollinators (contrary to almond). The review doesn't seem to consider selective pollinator targeting but certainly you would have to consider these nasty chemicals being an unhappy consequence of some previous adaptation...which can happen.
7:13 am, February 06, 2010