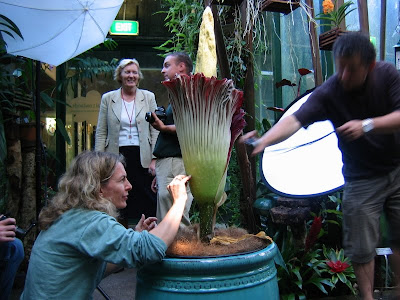 Plenty of plants generate heat to attract pollinators, including the giant Titan Arum we have on flower every now and then at the Royal Botanic Gardens in Sydney, and many cycads.

These plants reckon (in an evolutionary sense of reckoning) that it’s worth putting energy into heating if they can increase their changes of successful cross-pollination. So if the Titan Arum (Amorphophallus titatum) produces heat along with its rank smell of dead possum, it will attract plenty of flies so that its flowers are fertilised and produce seed.

One plant has found a way to warm its flowers but not invest the energy, at least not directly. One of the hellebores, a genus of plants popular in gardens around Australia but native to Europe, has the attractive common name of Stinking Hellebore, because…it stinks. Its botanical name, Helleborus foetidus, also alludes to this unsavoury character.

Rather than produce the stink and heat itself, it gets help from a fungus. Most of us know by experience that fungi – whether on food, fashion or feet – can stink. They range from faint musty odours to quite rank. But they can also generate heat.

In this particular case, a yeast (the same fungus that gives us bread, beer and vegemite) is deposited on the Stinking Hellebore flowers by a bumblebee. The hypothesis was that these yeast cells generated the heat, and I presume the smell (this study focussed on heat only).

Scientists working at the Doñana Biological Station in Seville, Spain, injected clean specimens of the Stinking Hellebore with this yeast and found that they were 2-7 degrees C warmer. The results of this study have just been published in the Proceedings of the Royal Society.

The yeast generates heat as it ‘digests’ the floral nectar. So although the plant doesn’t have to produce its own warmth, it does sacrifice some nectar to the fungus. Everything has a cost but this yet another example of a nice symbiotic relationship in nature.
Image: Extracting some of the smelling, warm outputs from the Titan Arum. (Thanks to Jim Croft for story idea.)
Email Post
Reactions: