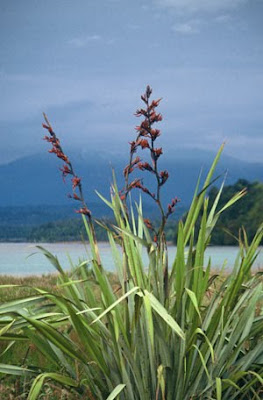 Is New Zealand Flax (Phormium tenax) native to Norfolk and Phillip Islands, and does it matter? Two papers in the latest issue of the Gardens’ plant ecology journal, Cunninghamia, come to different conclusions about its likely origin on the islands but both think it matters.

Let’s start with what should be the simpler question – does it matter? In 1986 rabbits were eradicated from Phillip Island and plants have regenerated dramatically. The National Parks staff have to decide which plants to control (weeds) and which to encourage (local natives).

So far New Zealand Flax has been ‘actively propagated and distributed’. That is, it’s treated as one of the good guys. However it grows vigorously and if not native, it may well displace local plants and upset the island’s ecology.

This is a complex business and one can of course argue that humans are part of, or agents of, nature. And what is the difference between a seed that spreads across land or floats across an ocean a few hundred thousand years ago, with one that’s carried accidentally or deliberately by one of us in the last few hundred years, or even last year?

In Australia we generally treat pre-1778 vegetation as the benchmark, but that is clearly an arbitrary date albeit practical. We also tend to treat any plant carried around due to human activities as at least suspect and most probably a weed. Of course a weed is just a plant out of place or out of balance, and a particular species can be a weed one day or in one location, and not others.

Enough philosophising. Let’s just accept for arguments sake that if it is a ‘weed’ we shouldn’t encourage its growth on Norfolk and Phillip Islands. So is it a weed? It’s been known to grow on Norfolk Island since at least 1774 but not on Phillip Island until planted there in 1967.

Peter Coyne from Beloconnen in the ACT says it most probably is a weed. He bases this conclusion on the following facts:
- New Zealand Flax is an invasive plants in many parts of the world.
- The apparent failure of the Flax to arrive ‘naturally’ (i.e. without human assistance) over two million years suggests its ‘natural’ arrival in the last 800 years is highly improbable.
- Polynesians are known to have spread deliberately many plants through the south-west Pacific.
- Norfolk Island seems to have been colonised from Raoul Island by Polynesian people from New Zealand, and the Flax was a widely used fibre plant by the Maori in New Zealand.
- There is no historical pollen deposited in the soil at an area described as covered by this plant in 1774.

Kevin Mills, of Jambaroo in New South Wales, disagrees. He says the pollen evidence is weak – even in the top layers of soil, presumably deposited over the last few hundred years, there was no pollen found so its absence from lower (older) layers is hardly conclusive. Mills also points out that genetically the Norfolk Island populations are more similar to those of the North Island of New Zealand and a few other associated islands such as Chatham Islands, than to those of the South Island, consistent with a ‘natural’ arrival.

It is hypothesised that sea currents would facilitate travel of Flax seed to Norfolk Island from the west coast of New Zealand. Mills concludes that given three million years, it is not unreasonable to expect Flax would have made this journey by sea, or by wind or bird.

Mills also isn’t convinced that New Zealand Flax was necessarily absent from Phillip Island before 1788. Even if it was, he doesn’t consider this evidence of Flax being introduced to Norfolk Island.

He bases this conclusion on where the Flax grows on the island (in a distinct and apparently natural habitat, and not in swamps as in New Zealand), it distinctiveness compared to New Zealand populations, and (a little more subjectively) the reputed inferiority of the Norfolk Island variant for weaving (so why would Polynesians introduce it).

If you want to decide yourself, take a look at the two papers when they appear on Cunninghamia online very shortly.

Steve Asbell said…
Wonderful post! It seems that Australia always gets hit the worst by invasive species, which is a shame since it took so long for the indigenous life to develop in the first place! My simple and perhaps naive solution is this: If it has a weedy nature and the dispersal methods are so effective that we can't even tell how it arrived, then we have no business actively propagating and dispersing a plant that could easily do so without our help. If we are to reintroduce species then they should be the ones that need a little help from humans to naturalize again, not a proliferating thug. I think its great that the rabbits are gone though.
1:48 am, January 15, 2010

Talking Plants said…
That's not a bad approach. I suspect we often reintroduce the 'vigorous' plants because we know they will take off and survive - mollycoddling sensitive plants can be a strain (and often not successful). The Botanic Gardens is assisting with the reintroduction of a She Oak in Sydney which looks like it will need 'gardening' almost forever!
7:22 am, January 15, 2010

Raleigh Florist said…
I agree completely with the Rainforest Gardner. The problem I see all the time is when species are brought in that are not native and the next thing we know they are growing everywhere. Many become so prolific it is hard to control. Putting that genie back in the bottle is a lot tougher than it seems.
4:29 pm, January 16, 2010

Talking Plants said…
Agree. Need some good research first, not just to make sure you have the right species but also that it will do the 'right' thing when you reintroduce. It's not as simple as throwing in all bits and pieces, and hoping it will all be OK or return to something like what used to be there.
4:37 pm, January 16, 2010

Robsled said…
Governor Philip sent the Sirius on the 14th February 1788 to Norfolk Island with flax seeds, some Marines, some men and women convicts and some men who knew how to grow flax, to harvest it and to process it.
Where those flax seeds came from is not mentioned.
Cook brought New Zealand flax back to England from New Zealand and it was reported to be equivalent to the European/Russian flax. The New Zealand Maori women knew how to process the New Zealand flax however the European methods used on Norfolk Island did not produce a suitable product
Back in Sydney the local flax found to grow at Rose Hill had been harvested completely by the aborigines but Governor Phillip believed in 1788 that Norfolk Island would provide enough flax for the colony based on the reports of the fertility of land there and trials in London with Cook's NZ flax seeds.

Talking Plants said…
Thanks for the extra information on Governor Philip and Cook's connection to this flax story. Much appreciated! Tim
9:30 am, November 27, 2017