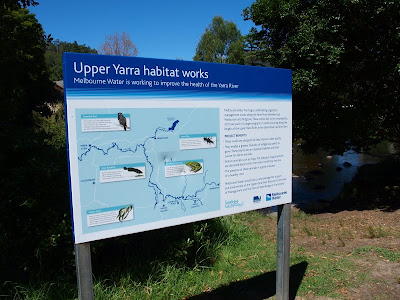 Back in Victoria, and the rivers and creeks are not in flood (unlike last time). Contrary to what most people think, that is good for algal collecting. I can actually see the rocks and find the species I want.

I took a day off visiting human relatives to dip into streams in the upper Yarra and Acheron catchments, just north-east of Melbourne. A beautiful day for algal collecting - warm and at least a week since the last big rain storm.

You'll be glad to know I found everything I was after, and a little bit more. The great thing with freshwater algae is there is always something new to discover - a new habitat to explore or something missed on the first visit.

Racecourse Creek near Narbethong turned out to be the big surprise, with three different genera of red algae (Nothocladus, Batrachospermum and Sirodotia) growing together in a rocky riffle area.
I dried some of each collection in silica gel for DNA sequencing, and the rest in 4% formalin (formaldehyde) for long term preservation in the herbarium. Because I've collected around here before - I spent three years studying the algae of the upper Yarra River - I can identify most of the species in the field.
I did manage to collect something which might just be the illusive 1898 alga I mentioned in my September posting). I had a lovely comment and email from a previous owner of The Hermitage, Amy Robinson, after my blog last year. Amy suggested I look at a spring-fed stream near the guest house and put me in contact with a close neighbour. Unfortunately I couldn't get through to the neighbour yesterday so I scoured a few creeks in the nearby area - I don't expect this species to be restricted to a single creek or segment of a creek.
I couldn't find anything like it near The Hermitage but where Racecourse Creek gathered up a few tributaries on the other side of Narbethong I found at least the right genus - Sirodotia.
Along with the other collections, I'll send it to my colleagues Morgan Vis and Wayne Chiasson at the Ohio University, USA, for sequencing, and have a close look at it microscopically when I get back to Sydney.
As with my last visit, I travelled through some of the areas devastated by fires last summer. Marysville is almost unrecognisable but new houses and shops are replacing bulldozed piles of burnt timber and dirt.

Outside the towns there was lots of regrowth as well and quite a few summer flowers among the blackened tree trunks. 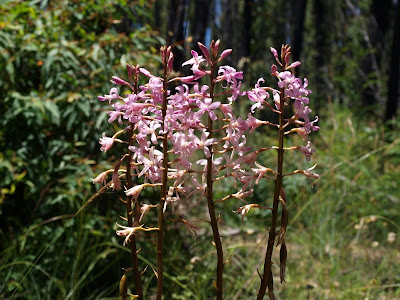 Racecourse Creek (below) flows through burnt forests and farmland but under the water the algae seem to be unaffected, as you might expect. 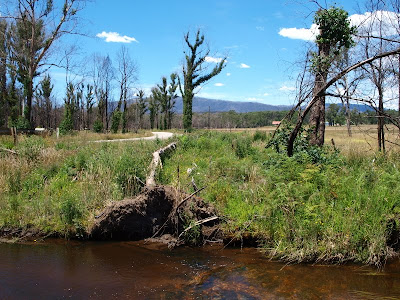 Images: the first picture is a sign at Warburton - a sign that they are taking the health of the river seriously (even though algae not mentioned!), the second a plant that will have benefited from the fires (the Hyacinth Orchid, Dipodium roseum) and finally Racecourse Creek with resprouting trees in the background.
Email Post
Reactions: