What does Darwin have to do with Succulents? 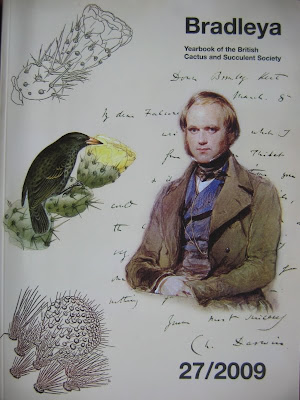 For non-botanical readers, succulents are fleshy plants. Things like cacti, stone plants, aloes and even (for the broad-minded succulent fancier) frangipanis.

Tonight I’m giving my annual talk to The Cactus and Succulent Society of New South Wales. As Executive Director of the Botanic Gardens Trust I’m patron of the society and this is part of my very pleasant responsibility to that society. And as usual, my talk is not really about cacti or succulents, but there is a tenuous link.

I’m going to talk about Charles Darwin and his Garden – both the garden (and glasshouse) behind his home at Downe, along with the ‘garden of plants’ that clothes the earth. As I’ve done before, I’ll talk about Darwin The Botanist.

But for this talk, I’ve added some information taken from this latest issue of the journal Bradleya. Volume 27 is devoted to celebrating Darwin and Royal Botanic Gardens Kew, and includes a short article by Gordon Rowley on Charles Darwin’s interest in succulent plants.

It’s a short article because Darwin didn’t have great interest in these plants, but probably only because he had limited access to them. He collected some cacti from the Galapagos Islands (one species was named after him), studied the movement of plant growing tips (called circumnutation) using at least four succulents, and tested how long a plant could survive without water by hanging an Echeveria from his study roof for four months (it survived and flowered).

I’m taking an Echeveria with me to the meeting as my Kris Kringle gift.

[This is my first attempt to load a posting onto Posterous, which is then meant to feed to Twitter, Facebook and http:/talkingplants.blogspot.com… We’ll see how it looks…]