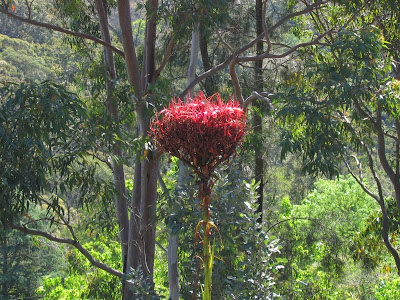 This radio story is mostly about ClimateWatch but also (a warning), a little about seasons too. Anyway, this is how it goes...
The Botanic Gardens of Australia, along with various other scientific organisations in the country, have teamed up with Earthwatch to create an environmental monitoring program for the whole community.

The idea is that you become a ‘ClimateWatcher’, seeking out and recording changes in the world around you. When do autumn leaves start to fall, when do flowers bud, and when do migratory birds appear in your garden?

By accumulating information on regular seasonal events like flowering times, we can start to track and understand the effects of accelerated climate change on our plants and animals.

As you know, personally I think we need to better understand our current seasons and seasonal changes before we can detect the climate change affects. I’m tired of hearing about ‘early springs’! At the moment we just aren’t ‘in tune’ with our environment.

‘Four seasons’ might make for good music, but it doesn’t make any sense in Sydney, Australia. Our plants and animals dance to a different tune. There are six seasons recognised by the Dharawal people, south of Sydney. I’m convinced we have at least five, with ‘flowering spring’ starting in August – or maybe even late July around Sydney – and another season added between spring (or ‘sprinter’ as I’ve called August and September) and an extended 4-month summer.

As we speak, it is nearly the end of what I’ve called ‘sprummer’ (October and November), the changeable, and often windy, pre-summer season.

I’ve tried, unsuccessfully, to reach a consensus with my botanic gardens colleagues from around Australia. Brisbane is supportive of the early spring. Melbourne and Canberra thinks it’s too cold in August to call it spring, even though their wattles are blossoming. Adelaide and Perth feel that peak spring flowering is more September than August. Alice Springs is somewhere in between, and Darwin didn’t know what spring was!

If this is all too hard (or the distance of the earth from the sun and changes in temperature are considered more important than biological stirrings), we could perhaps designate Floral Days – like Wattle Day – for each of these important seasonal shifts. I’d first of all move Wattle Day to 1 August…but that would require regazetting at national level and would my other botanic gardens’ directors support it?

Look up http://www.climatewatch.org.au/ for more information on the community monitoring program, or earlier postings for more about resetting our seasonal calendar.
*This Passion for Plants posting will also appear on the ABC Sydney website (possibly under 'gardening'), and is the gist of my radio interview with Simon Marnie on Saturday Morning sometime between 9-10 am on 702AM.

Image: The Gymea Lily, one of the plants to be monitored by the ClimateWatch program.
Email Post
Reactions:

Matt DiLeo said…
If the goal is to educate the public on climate change this seems counterproductive. All my life I've heard stories from my parent's and grandparent's generation about how much colder it was in the Philadelphia (U.S.) region decades ago, but this is likely just normal climate variation like the Medieval warming or The Year Without Summer.

If climate change was this obvious, it wouldn't be controversial. Conflating the very precise (e.g. ice core) data that climate scientists rely on with gross local weather variation seems like a great way to "prove" to people that climate change is not occurring when their flowering times don't change the right way.

How controversial is climate change in Australia anyway? In the U.S., I hear about it EVERY day (especially since those stupid letters came out).
1:39 am, December 06, 2009

Talking Plants said…
I certainly agree with you about people mixing up local, cyclic and short-term variations with long-term climate change. In fact that's what has driven me to try and change our seasonal system here in Australia - I'm tired of being told that spring has come early this year due to climate change when in always has come early (August rather than September).

The Idea of ClimateWatch is partly to amass enough information to monitor changes over a longer period (to relate them to herbarium data of a few hundred years, and to set up some data for future comparison), but we do have to be careful in how that is interpreted. More importantly, perhaps, we get people to start to watch what is going on around them in the natural world and see that a) it does change each year anyway (and not necessarily according to some solar based 4X3-month season model...) and b) to detect a few biological changes that have been already observed in longer term (200+ year observations). True that we may pick up small blips over even a few hundred years but we'll need to correlate with better data such as ice-core.

Controversy in Australia? Yes and no. If you read our papers and listen to our opposition party in (national) government you'd think that the science was still under debate. However I think the majority of people accept there is a problem and we need to act swiftly, but are a little depressed by the thought and would like it in their hearts to be proved wrong. And yes 'those letters' don't help.
7:06 am, December 06, 2009

Matt DiLeo said…
Cool! thanks for all the info. No matter what, it's a great thing to get the public more aware of and involved in science and nature.
11:24 am, December 08, 2009