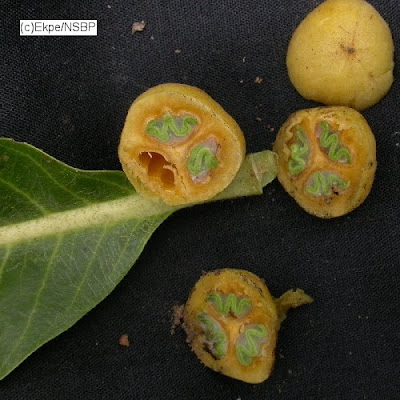 Wild fruit trees are providing not only food but also housing for local communities in Cameroon. By domesticating the likes of chocolate berries, gingerbread plums, monkey oranges, gumvines and tree grapes, some Camaroonians can now afford school fees, zinc roofing for their homes and even mobile phones.

The 7th November edition of New Scientist reports on a booming business bringing local fruits into mass cultivation. Reporter Charlie Pye-Smith says it started with just a couple of species – such as the African plum (Dacryodes edulis) and bush mango (Irvingia gabonensis) – but there are probably another 300 species to pursue in Camaroon alone.

The fruit trees are common enough in the wild, but as Ebenezar Asaah from the World Agroforestry Centre says ‘We knew their biological names, but that was about all.’ Roger Leakey, a former Director of the Centre, calls them the ‘Cinderella species’ – fruits science and big business have overlooked.

Just a couple of the fruits featured by Pye-Smith:

Aizen (Boscia senegalensis) – ‘the yellow, cherry-sized berries are sweet and pulpy when ripe, and harden into a sweet caramel-like substance when dried’

The domestication is mostly through cuttings or marcotting (aerial rooting by cutting bark and wrapping branch in moist rooting material), which speeds up the time from propagation to fruiting.

The kola tree, for example, takes more than 20 years to fruit from seed (a local saying is ‘if you plant the nut of a kola tree, you’ll die before the first harvest’) but only 4 years from a marcot.
Another 290 or so species to go...
Image: A sugar plum (Uapaca togoensis) illustrated at Metafro
Email Post
Reactions: