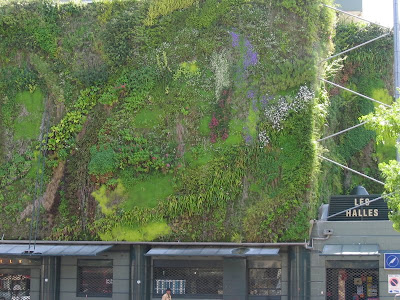 I was lucky enough to attend the inaugural Young Horticulturalist of the Year for New South Wales lunch and announcement. And the winner was…Matt Donaldson, the owner of a landscape and property maintenance business called Green Acres.

His horticultural passion is greening vertical walls, or as he puts it “put[ting] a new spin on landscaping facades and walls …dressing up drab buildings, making a more pleasant workplace and streetscape [by] greening concrete jungles”.

I’ve included below a slightly edited report from horticultural journalist and television star Ally Jackson’s report on this great initiative by the Australian Institute for Horticulture. And by the way, congratulations to all four finalists, particularly our very own Julie Cooper!

“The inaugural Young Horticulturist of the Year Award has just been garnered on Matthew Donaldson for his innovative plans to create a living wall on the Hawkesbury Regional Museum. The $10,000 prize had encouraged many fledgling horticulturists to apply, with four entries truly standing out.

“The prize is open to horticulturalist in their last year or recently graduated from TAFE. Offering the richest award to horticulturists under 35, the state competition is open to those studying any form of amenity horticulture, including nursery production, retail nursery, landscape construction and management, aboriculture, natural area restoration, turf management and parks and gardens.

“Julie Cooper is a 4th year apprentice at Sydney’s Royal Botanic Gardens. Her project involved creating a collection of postcards depicting the plant collection of the gardens. Giving the visiting public an “insiders view into how a garden is born, grows, evolves, matures and changes due to environmental cycles and seasons”. An artist also, Julie would use her talent as a photographer to capture the beauty of nature and the cycles of plants, seeing the postcards as an extension of the gardens themselves, “a way to communicate beyond the garden walls, what is happening within…A tool to reconnect people with the environment”.

“Lilly van Epen is a horticulturist and garden designer-in-training. Her enthusiasm for horticulture is contagious and her drive and ambition will take her a long way. Lilly’s proposal for YHOY was to develop and expand the horticultural knowledge and understanding of primary school-aged children. A program is already underway at Marsfields’ Kent Road Public, which involves kids in 3- 6 class. Lilly’s proposal differed from other school gardens as she intends to implement “structured horticultural lessons that will encourage students to develop a symbiotic relationship with their natural environment”.

“Nathan Burke is a Permaculture garden designer, he volunteers at Moss Vale’s community garden and Harmony community farm and is a member of the Southern Highlands Seedsavers Network. His project was borne out of volunteer work with the St Thomas Aquinas Primary School food garden. As project designer and facilitator of the permaculture food garden he said, “I especially felt that creating a school garden would be an excellent way to teach children the value of food as well as showing them how fruit and vegetables can be produced sustainably and ecologically without straining or damaging the environment, but actually enhancing and enriching it”. Nathan’s garden design has inspired the kids in the school to become active, responsible gardeners, nurturing and growing their passions for gardening.

“Matt Donaldson runs his own Landscape and property maintenance business called Green Acres. He has a vested interest in vertical gardens, has registered the name ‘Living Walls’, and since being announced the winner, is well on his way to greening vertical spaces -initially in the Hawkesbury region. His project involves building a living green wall at the Hawkesbury Regional Museum, depicting the logo of the museum. Matt wants to “put a new spin on landscaping facades and walls …dressing up drab buildings, making a more pleasant workplace and streetscape [by] greening concrete jungles”.

“Having won some media training as well as the prize money, expect to see more of the inaugural winner of 2009’s award, Matt Donaldson. And for years to come, we will welcome the input of other young, inspired horticulturists who walk away winners of the Young Horticuturalist of the Year award. It’s a very exciting time to be in horticulture.”

Lushe said…
Well done Matt,
Drop us an email at info@lushe.com.au. We would like to add you to our network of vertical gardeners.