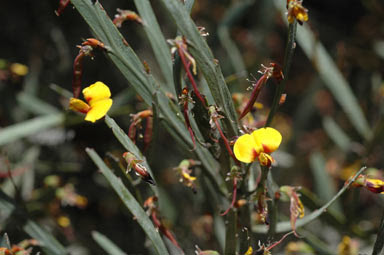 Lots of ground covered, from new tribes and subfamilies of Restionaceae, to linking ‘type specimens’ to some species of Eucalyptus. For New South Wales, there is a new species of Solanum from the mid north-coast, and a new name for a common Zostera in the intertidal east coast.

Four new species are described in the pea genus Bossiaea, with a key to all the species in this genus without leaves and with small flower scales (bracteoles) that fall off early.

Before this paper everything that fitted the above description was called Bossiaea bracteosa. That name now only applies to plants growing in subalpine areas of Victoria, the ones with prominent leaf scales with a heart-shaped base and distinct veins.

Plants growing along the Shoalhaven River near Braidwood are now Bossiaea bombayensis, from the banks of the Murrumbidgee River and its tributaries in ACT Bossiaea grayi, from the Abercrombie karst area south of Bathurst Bossiaea fragrans, and from the Brogo River catchment near Bega Bossiaea milesiae.

The differences are all to do with the flower size, structure and colour, as well as features of the green flattened stem (the cladode).

Bossiaea bracteosa was considered rare in New South Wales. The new species range from restricted and locally abundant, to under threat of extinction (in one case the remaining 20 plants are being grazed by goats and facing competition from Serrated Tussock grass).

:) These are ‘good’ name changes, where were learn a little more about the plants and their diversity.
*Journal issue will be loaded onto this site shortly. Image: One of the new Bossiaea species - this one was growing in the Australian National Botanic Gardens, taken by Murray Fagg (photo No.: dig.5200).
Email Post
Reactions: