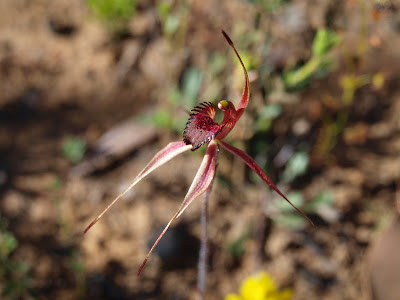 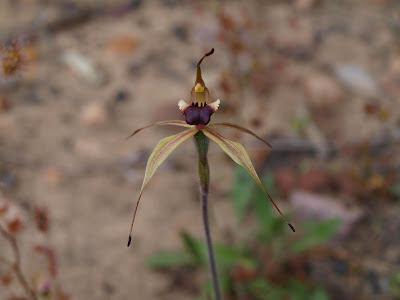 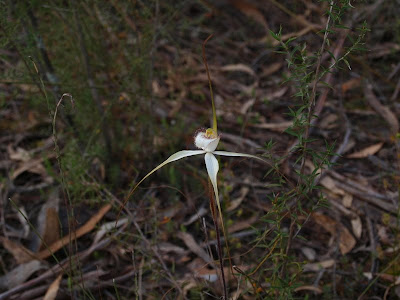 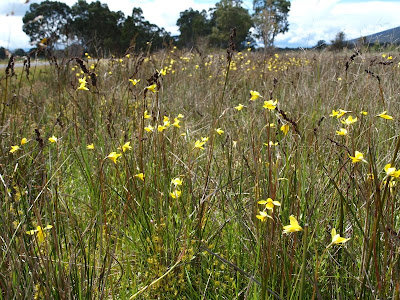 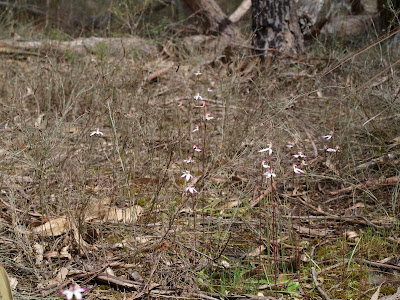 Today five new additions to the list of orchids sighted (and enjoyed) at the Grampians. Three of them are illustrated singly above, as well as a field of Golden Cowslips (Diuris behrii) and a clump of Musky Caps (Caladenia gracilis)

The three new ones illustrated are:
Caladenia reticulata – reddish flower with narrow teeth at edge of ‘lip’
Caladenia clavigera – flower with wavy lip edge and blob of red-black
Caladenia venusta – illustrated above, mostly white and with floppy ‘arms’

Also recorded (and photographed but not posted ) were:
Caladenia iridescens
Pterostylis ‘macilenta’ (a leafy greenhood restricted to Grampians)

The rules of orchid twitching – made up as we go along – are no leaves without flowers buds that aren’t at least a little bit open. The latter category is for sun orchids. We’ve seen a couple of Thelymitra species in bud that will probably open in the next week or two but these have been excluded from the list – even when we can guess or confirm identification from what we see.

We’ve also excluded anything recognisable by the leaf, but not in flower. We haven’t recorded, for example, Red Beaks or Undertaker Orchid (Pyrorchis [once Lyperanthus] nigricans) whose fleshy leaves are a common sight in recently burnt areas.

In case you are interested, I’m taking a more traditional approach to the generic classification. In particular, I’m not splitting up Caladenia – this approach is acceptable and is in line with most of the herbaria and botanic gardens around Australia.

Other genera may well warrant splitting (e.g. the greenhoods, Pterostylis) but for now I’m sticking with what I know and what isn’t wildly incorrect in good taxonomy. Good taxonomy, to me, is each group including all the descendents of a common ancestor, and minimising taxonomic change.
Email Post
Reactions: