Leafless in Melbourne (and Sydney) 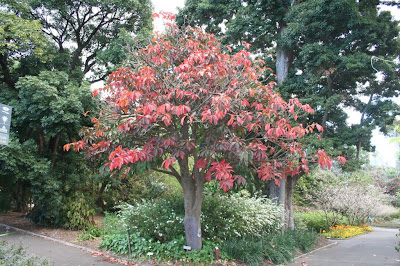 I'll explain the significance of this Sydney 'autumn tree' in due season, but I took a walk in the Royal Botanic Gardens in Melbourne yesterday. Very beautiful, as always, but also a little stressed. The rain that kept me out of the rivers wasn't enough to hide the effects of a long drought. The trees particularly were doing it tough.
That said, you have to be careful this time of year. Plenty of plants lose their leaves in 'late sprinter', something I mentioned in passing a while ago (see shedding-leaves). Mainly it's to get rid of damaged and battered leaves, as well as some of the pests that go with them, and replace them with fresh foliage.
Many of the species are tropical, with leaf drop occurring in the dry season to help retain water and save energy. Just about any tree will drop some leaves during drought.
The Melbourne Gardens has a great collection of conifers, dating back to the great botanist Ferdinand von Mueller, and the Taxodium species have shed their leaves as they do each year. The figs are either doing the same (e.g. the White Fig, Ficus virens, from northern NSW up into Asia) or looking a little worse for wear.
Back in Sydney, the (four) leaves on my four-year old Barringtonia neo-caledonica at home are a deep claret - or is it burgundy or shiraz - red. Luckily Simon Goodwin has come to the rescue with a picture of a specimen doing much better in the Royal Botanic Gardens (see above).
And there are others around the Domain and Royal Botanic Gardens in Sydney. In addition to the White Fig, there's the aptly named Deciduous Fig, Ficus superba, native from Nowra northwards into Asia, but with the variant called henneana known only from Australia.
It's not just trees from Australia or nearby islands. The beautiful Ficus vogelii from tropical West Africa is leafless as we blog. Our Red Cedar (Toona ciliata) collected from Parramatta 180 years ago is desperately trying to produce new leaves as the flying-foxes snap shoots and damage growing tips, while a Chinese species, Toona sinensis, is I think 'naturally' without leaves in late sprinter.
Yes the Melbourne Gardens are suffering, but trees know the best way to deal with hardship is to shut down and drop out.
Email Post
Reactions: