King of the Ferns* 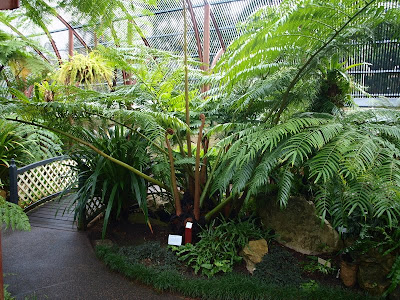 The eight metre long fronds of Angiopteris evecta are the largest produced by any fern in the world. The King Fern (also known as Giant Fern or Mule’s Foot Fern) can also have a trunk up to three metres high and one metre across.

It’s not to be confused with Todea barbara, a local fern that is also called the King Fern. It’s very impressive too, but doesn’t have the massive fronds of the Angiopteris.

There is one preserved specimen of an Angiopteris frond in the National Herbarium of New South Wales (here in the Royal Botanic Gardens) that was collected from Tweed Valley in 1909. It’s thought the species was once scattered around the far north-east of the State, possibly extending as far south as Byron Bay.

The species was presumed extinct in New South Wales until a single living plant was discovered in December 1977, growing naturally in the Tweed Valley. Occasional reports of other occurrences have not been confirmed.

Its distribution in Australia is sporadic. It’s known from Carnarvon Gorge, Fraser Island and then more common in the wet tropics of far north Queensland, and there is only one small population in the Northern Territory, in north-eastern Arnhem Land.

Outside Australia it occurs from Madagascar to tropical Asia, and it’s relatively easy to grow in a protected, moist location in a Sydney garden. It has been planted widely throughout Asia and the tropics and has become invasive in Jamaica, Hawaii and Costa Rica.

Fossilised fronds very similar to those of the King Fern have been found in rocks about 300 million years old. Ferns and their relatives, such as giant clubmosses, were the dominant vegetation before flowering plants evolved and ferns like the King Fern were among the earliest large plants to colonise the land.

This is before the great southern land of Godwana split away from other parts of Pangea, so what was to become Australia was still connected to Europe and North America.

We have a couple of King Ferns in the Royal Botanic Gardens, including a large specimen in the Fernery and one beside the Botanic Gardens Creek, near our Restaurant. Both grow near to specimens of the ‘other’ King Fern, Todea barbara.

I believe the Creek specimen is celebrating its 40th birthday this year. At least that’s how long it’s been with us – it may well have been planted as an already large, giant fern.

Image: The King or Giant Fern in the Fern House at the Royal Botanic Gardens
*This Passion for Plants posting will also appear on the ABC Sydney website (possibly under 'gardening'), and is the gist of my radio interview with Simon Marnie on Saturday Morning sometime between 9-10 am on 702AM.
Email Post
Reactions: