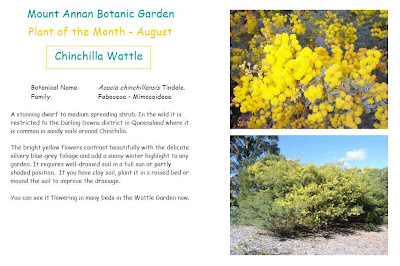 Firstly sorry to interstate ABC radio audiences who have had to endure my Sydney perspective on life, seasons and everything. This whole seasonal thing has become a popular topic.
I thought I'd share with you an article from the Newcastle Herald by Jeff Corbett. Jeff has similar ideas himself and has published on this a few times already. Today he summed up the sitation nicely in an article headed 'Spring to the Cause' (Newcastle Herald, 11 August 2009, p. 8). Jeff was happy for me to post his story, and would welcome further debate on his blog. And for more of my own thoughts on seasons click here.
Spring to the cause (by Jeff Corbett, Newcastle Herald, 11 August 2009)

"IT'S an indefinable something that produces an indefinable sensation, and it happened on Sunday. That was the arrival of spring.
Yes, I know spring does not happen until September 1, and that this date has been kicking off the Australian season of rebirth ever since the early 1800s when bureaucrats brought it forward from the spring equinox. They advanced spring by about three weeks so the overheating soldiers in the NSW Corps could swap their heavy winter uniform for the summer uniform earlier.
So not only have we been burdened by the unquestioned adoption of the northern hemisphere's four seasons, our spring, summer, autumn and winter were shuffled forward to meet the excesses of a military uniform designed for British winters.
We have modified laws, language, social structure and government to suit our own purposes, and one day we'll rid ourselves of British royalty, yet we accept the mother country's seasons without question.
Or you do. For a long time I have believed that I was Nigel No Friends in questioning, as longtime readers may recall, why we have just four official seasons, why they are of the same duration, why they begin when they do and why they should apply uniformly across a country of impossibly varied climate.
But I am Nigel Two Friends. On Saturday, I have just read, a guest speaker at a garden and market day in Pymble in Sydney outlined his case for five seasons, and that speaker was no less than the chief of Sydney's Royal Botanic Gardens, Tim Entwisle. And at Seaham the founder of Nature Watch and a retired lecturer in biological and environmental science, Kevin McDonald, agrees with him.
Dr Entwisle argues that the four seasons we have inherited from the northern hemisphere just don't fit our bill, and to illustrate this he points to the fact that the flush of flowering begins in and around Sydney in late July or early August. So he is proposing five seasons for the lowland coastal strip that extends north and south of Sydney and which includes Lake Macquarie, Newcastle, Port Stephens and, on a good day, Maitland.
According to Dr Entwisle's calendar, and my own indefinable sensations, we are now in spring, which occupies August and September. Yes, just two months, like four of the five seasons, because these seasons reflect segments of the natural cycle here on our coastal strip, not somewhere in the northern hemisphere.
Next is pre-summer, in October and November; then peak summer over four months, December, January, February and March; autumn in April and May; and winter in June and July. It does seem ludicrous that November is classified now as spring, that March is autumn.

Mr McDonald, who has been keeping daily records of his nature observations for many years, agrees with Dr Entwisle by and large. He points out that Aboriginal people had five, six or seven seasons that reflected the natural sequence in their region rather than another hemisphere.
Our region has six months of hot weather, Mr McDonald says, and that assessment fits neatly with Dr Entwisle's six months of pre-summer and peak summer. Mr McDonald co-ordinates a project, Nature Watch, that involves a loose group of people interested in observing the natural world (kevinmcdonald@hotkey.net.au if you're interested), and their records establish that while some things in nature are changing with changing temperatures, others that rely on daylight length are not.
Dr Entwisle has a fallback position. If we must stick with the other hemisphere's seasons he suggests we mark the start of critical periods in the botanical cycle, periods that will exist despite our unwillingness to recognise them as seasons.
Wattle Day on September 1 would have to be moved back to a date that more widely reflects the start of wattle's flowering, August 1, then we'd have Telopea Day on October 1, Hyacinth Orchid Day December 1, Banksia Day April 1, and Grevillea Day June 1.
We could do with more colour in our lives."
Image: 'Plant of the month' for August at our Mount Annan Botanic Garden. The wattle garden is spectacular at the moment, signally the start of spring.
Email Post
Reactions:

Jim said…
Real Australians acknowledge six seasons around when it rains and when it doesn't - important stuff when you are talking plants. See: http://www.environment.gov.au/parks/kakadu/nature-science/seasons.html

Talking Plants said…
Yes I knew as soon as I said the north had two seasons I was on shaking ground! Seems that six seasons is the norm in most Indigenous calendars around Australia, which is intriguing. And we'll have to be more creative with our new season name.
4:46 pm, August 11, 2009

Melanie said…
I've acknowledged pre-spring in my blog today then saw you had written about it yesterday! It starts here in late July and goes as long as the daffs are in bloom (about 4-5 weeks). Winter always seems to finish before it gets going.
11:49 am, August 12, 2009