Best Orchid in the Botanic Gardens? 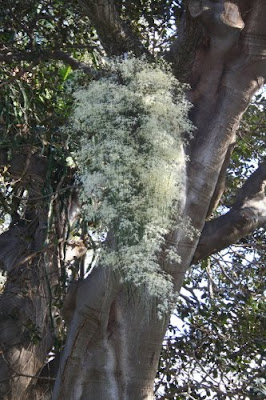 We have this fantastic Port Jackson Fig near our Palm House. It's a beautiful tree in its own right, but around and in it are a bunch of equally pretty plants. In flower right now is the Thin Pencil Orchid, also called the Rat's Tail Orchid and Bridal Veil Orchid.
If you look up into the tree you'll understand why it's called the bridal veil - the flowers are like a cloud of white stars. And if you are lucky a waft of the perfume may drift your way.
Botanically it's a species of Dendrobium or Dockrillia, depending on the taxonomy you chose to use. At the moment we have it filed away as Dendrobium teretifolia. It grows naturally from the tip of Cape York to south-eastern New South Wales - David Jones in A Complete Guide to Native Orchids of Australia illustrates the species with a picture taken in Penrith.
According to Jones, in New South Wales it grows almost exclusively on Swamp Oak (Casuarina glauca), a species that still grows naturally in the Royal Botanic Gardens. We think our surviving plants of Swamp Oak are suckers from a tree that once grew on the edge of Farm Cove, before the cove was reclaimed in the middle of the nineteenth century. Perhaps the orchid also once grew here naturally?
The same Port Jackson Fig is host to a climbing cactus, some kind of Epiphyllum species I presume, but I'll check with Simon Goodwin or Gareth Hambridge and add a comment later to confirm. Underneath there are a few hundred bromeliads, newly planted, and freshly blogged. I'm pretty sure the fig itself is planted, but Ficus rubiginosa a common local species, and does occur more or less naturally on the site.
Image: a picture of our Bridal Veil Orchid taken yesterday by horticulturalist Gareth Hambridge, who says this years blooming is particularly stunning. He also describes this specimen as the best orchid in our collection.
Email Post
Reactions:

Simon Goodwin said…
Hi Tim,
The cactus in the fig tree is Hylocereus triangularis which has the common name Queen of the Night. Its flowers open at night around January and February and close by the following morning.
Simon Goodwin - Gardens Information Officer - Royal Botanic Gardens and Domain
9:18 am, August 13, 2009

Talking Plants said…
Excellent, thanks Simon. It seems our visitors are less likely to see this one in flower...
7:46 pm, August 13, 2009

Carlos said…
It's one of my favorite orchids! I believe it's the same plant that I featured in my landscaping with orchids gallery.
8:26 am, July 19, 2011

Talking Plants said…
Hi Carlos,
Yes looks the very same plant! I note your comment that it is, or is close to, your favourite orchid too. There are many other wonderful pictures, and orchids, on this page so it must be hard to decide.
Tim
4:15 pm, July 19, 2011