Paradise in the Maiden Theatre 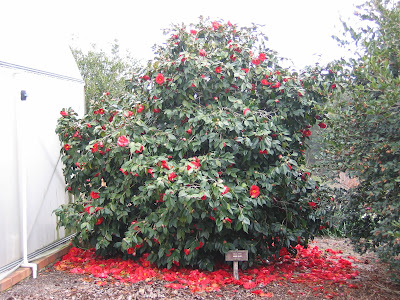 On Friday I had the pleasure of hosting the launch of 'Two Dogs & a Garden', the latest publication by Derelie Cherry. Representatives of the horticultural media, botanic gardens staff, Friends and friends, all gathered in the beautiful Maiden Theatre to hear about a beautiful book.
Graham Ross (30 years talking gardening with wife Sandra and daughter Linda on 2GB, 15 years on Better Homes and Gardens, and previously 10 years as Trustee at the Botanic Gardens) was guest speaker, and he spoke about Bob Cherry as a quiet, but over, achiever. The book covers a lot of ground, and as Graham said, contains many parallel stories. There is the meeting and marriage of Bob and Derelie, the lives of their two dogs of course, and most prominently in the luscious illustrations, the garden!
If you don't know the garden, its quite aptly called 'Paradise' and it lives north of Sydney in a place called Kulnura (the picture above is from my visit in 2004). Bob and Derelie open the garden twice a year, and this year with an additional October opening as part of the Open Garden Scheme. The next opening is the first weekend in August. I better not do any more advertising - have a look at their website for more about the book and the garden.
But back to the launch. Derelie was the next to speak and clearly this book was a labour of love, in more ways than one. When I first met Derelie about five years ago she was encouraging me to write a book. As I said on the night, it's books like this that are so well written, designed and produced that scare me off. Of course Derelie is well experienced in the task. She has a PhD in History, researching and writing on Alexander Macleay in colonial NSW, and over 20 years experience in in publishing books. As she says in her book, she met Bob Cherry at the Melbourne International Flower Show in 1999, and was wooed with flowers and the chance to live with two dogs and a garden.
Bob also spoke, about his love for growing and breeding plants, but also for seeing them in their natural habitat. Bob Cherry has a long association with the botanic gardens. In 1990 he travelled to southern China with Carrick Chambers and Ben Wallace, where in the first of his many collecting trips they covered 5000 miles and 400 plants (if I've matched up the right trip in Derelie's book!). Bob also travelled with Karen Wilson (a couple of years earlier, to New Caledonia), and later, with staff Simon Goodwin, Tony Curry and Ross Ingram.
Together they collected lots of plants for Bob's nursery but also for the botanic gardens collection - over 1000 accessions, from China, Vietnam, New Caledonia, Mexico. A couple I mentioned at the launch were the large King Fern at the entrance to the Fernery (which Simon Goodwin tells me also came with the fern-like attached plant, Tmesipteris (a species of which I saw on top of Mount Gower on Lord Howe Island last week...) and Camellia amplexicaulis which I mentioned in a previous post.
There was also the wild-collected Taxodium mucronatum (Mexican Bald Cypress) which was planted beside Central Avenue in the Domain two years ago to commemorate the 150th anniversary of the first First Class Cricket match held in NSW (between NSW and Victoria). And for someting completely different, the yellow-flowered Nelumbo (Lotus) that, according to Simon Goodwin, became a great hit in the Cunningham Pond in the late 1990s.
So lots of wonderful plants in the botanic gardens are thanks to Bob, and later Derelie who joined him on his trips. The fact that we have a wonderful book about the garden of plants at Kulnura, is thanks to Derelie, and of course Bob.
Email Post
Reactions: