Indoor Plants are Good for You 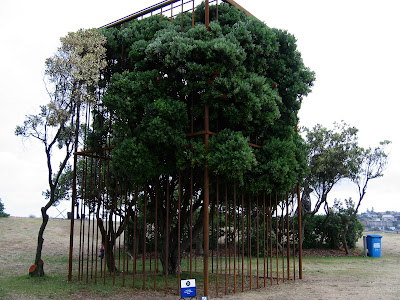 An indoor plant? From Sydney's 2007 Sculpture by the Sea.
On Gardening Australia on ABC TV tonight, Sophie Thompson mentioned recent studies showing that indoor plants are good for you. A few weeks back I spoke with Simon Marnie (Weekend Show, 702AM) about one of these studies, from an American hospital.
We also investigated the myth that indoor plants and flowers should be removed from rooms at night lest you die from lack of oxygen... This is the transcript of that chat.
"Plants are better than television and drugs. That’s a gross oversimplification of course, but a fascinating study of 90 people recovering from the surgical removal of their appendix found plants were pretty good. The study by Kansas State University was carefully planned and analysed, with post-surgery patients randomly assigned to hospital rooms with or without plants.

The patients with plants in their rooms felt better and took less pain medication. When asked what the best thing about their room was, nearly all of them said the plants. For the plant-deprived group, the television was the most liked aspect of their room.

Although not part of the study, it seemed that potted plants had better ‘healing properties’ than cut flowers. As patients recovered they would start to care for their potted friends, pruning and watering, and moving them into better light.

Other studies have demonstrated that indoor plants make the air healthier, and can increase humidity and reduce the quantity of harmful spores and bacteria.

But what about when the lights go out? Will you suffocate when the plant starts to consume more oxygen than it produces? During the day plants convert carbon dioxide and water to oxygen and carbohydrates – which is handy because we need both those products to survive.

At night, this ‘photosynthesis’ is turned off and most plants use oxygen to turn the carbohydrates into new leaves and shoots (as they do all day as well). Because of this ‘respiration’, patients in hospitals were once advised to take flowers and plants out of their rooms at night.

You can relax. It’s true that during the night plants take in oxygen and produce carbon dioxide, but then so do we. Some of you may have slept in a room with another person, an organism that also ‘respires’, and you’ll notice you didn’t die from lack of oxygen.

And in case you are wondering, it has been estimated (on the internet, of course) that a person at rest can survive 2.7 days in a sealed, typical sized room before the oxygen levels drop from about 21% to 17.5%, which is the level at which you start to not survive.

So it seems that you will not only survive the trauma of sharing a room with a pot plant, but it might just make you feel better."
Email Post
Reactions:

Anonymous said…
thanks!..i was concerned when i read an article that a plant may be suffocating me at night..I have asthma so I was a bit worried there..
8:15 pm, July 24, 2009

Mila from plants for hire said…
Putting some plants inside the house could make a much better air around. I think it could be better for an asthmatic person.
5:06 pm, February 21, 2011

Unknown said…
Excellent sharing Thanks for share i am sure its must help me. thanks for doing this.
Potted Plants
11:55 pm, April 05, 2011