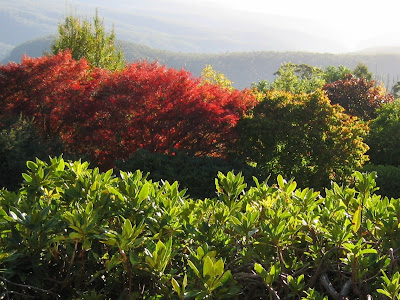 
As a preview, there is a nice review of the science of autumnal colour in the most recent issue of the scientific journal Trends in Ecology and Evolution (see below for reference details). I've written a little about deciduous trees previously, but this is about colour.


The starting point for the review is that autumnal red colouring of deciduous trees isn’t just a side effect of their leaves dying. As most people know, leaves are usually green because they have more of the green chlorophyll than other pigments. In deciduous trees, the chlorophyll breaks down into useful colourless compounds just before the leaves drop.


As the green fades, yellow and orange pigments (carotenoids) become visible and colour the leaf. But red autumn leaves are different. The reds and purples (anthocyanins) aren’t found in green leaves but are produced by the plant while about half the chlorophyll has been broken down. So red autumn leaves are not just due to the green fading away, and that intrigues plant biologists.

A popular theory among plant physiologists is ‘photoprotection’, where red pigments act like a kind of sunscreen to protect the innards of the leaf while it reabsorbs important compounds from the green chlorophyll. Apparently damage from sunlight is more likely in autumn due to lower temperatures slowing down some internal processes, thinning of the canopy leading to higher light levels and the reduction in chlorophyll itself decreasing the ‘shading’ of the inner cells.


There is some evidence for a screening effect and antioxidant role for red anthocyanins, but not so much in senescing leaves. And as yet no proof that red leaves help in absorption of nutrients from chlorophyll breakdown.


Ecologists are more attracted to ‘coevolution’ concept, where red is a warning signal to insects that the leaves are full of nasty chemicals, very few nutrients or about to drop. This would help the insects because they wouldn’t lay eggs in places where their young are not likely to survive. It may help the tree in reducing insect damage when new leaves are produced in spring – if the eggs do survive and the insects last the winter.


It’s a classic evolutionary ‘arms race’ scenario, where plant and predatory (or disease carrying) insect try to reduce the impact of each other so they can produce more offspring – the driver for evolutionary adaptation. There is some weak evidence for this coevolution and aphids, in particular, prefer green over red leaves. But there is a rub – aphids can’t tell green from red, and it may associated chemicals or attributes that attract and repel.


It is clear the jury is still out, and the proofs are just not there. It’s possible both theories, and others, may all be true, but not necessarily.


Further reading: Archetti, M. et al. (2009). Unravelling the evolution of autumn colours: an interdisciplinary approach. Trends in Ecology and Evolution 24: 166-173. You can access the article on line, but for a fee.
Email Post
Reactions: