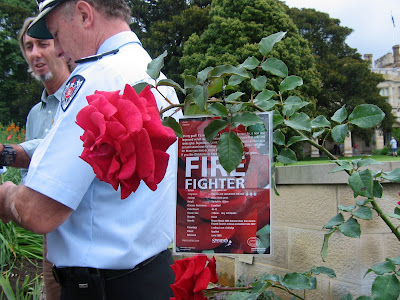 This is a Firefighter Rose, in front of a real fire fighter, Greg Williams, talking to Finbarr O'Leary, Execuctive Director of Swane's Nurseries.

Her Excellency Professor Marie Bashir AC CVO, planted a Firefighter Rose in the Government House eastern garden this afternoon. It's the first rose in the grounds, and a very significant one.
The Governor planted it to honor those who lives were effected by the recent fires in Victoria, as part of the 'The Governor's Bushfire Fundraiser'.

The large bloom is a double (two rows of petals), and has a lovely 'old fashioned rose' perfume. I gather from Finbarr O'Leary it will be available for sale in Australia around the middle of the year. This rose was named in the US to honor the firefighters who lost their lives on 11 September 2001 (further cultivars have been bred and released for other victims of this terrorist attack). 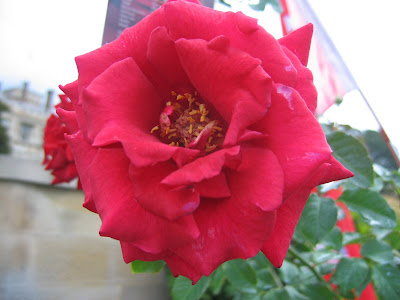