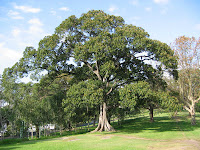 A weird jellyfish that can revert back to its juvenile state has been described as the world’s only ‘immortal’ creature.

Interesting concept immortality. I gather from discussions with Karl Kruszelnicki that animals made up of more than one cell have a kind of programmed death called ‘apoptosis’.

Many plants, and some animals, aren’t quite as finite. Although some plants have short lives - including trees such as wattles that might live fast and die young - they have greater potential for immortality.

Unlike a dog, for example, you can cut off the growing tip of a plant and regenerate that individual. A French botanist, Francis Hallé, takes this a step further and argues that most trees can be considered colonial organisms (or creatures if you like). Unlike a dog, they can be divided into pieces and not die. And the DNA in a tree may well vary from branch to branch – after 150 years, a bud on one side of a tree could be slightly different to one on the other side (but not necessarily – e.g. wollemi pines show little to no variation and see the King’s Holly below).

This colonial creature, the tree, can live for a very long time. Theoretically, according to Hallé, how long a tree lives is determined by things that do on around it such as diseases, predators, bad weather etc. Clearly something else is at work when some species of wattle die after 20 years and fir trees in Norway live to be 10,000 years old. Maybe there is some apoptosis, or maybe it’s all about physical limitations of getting water and nutrients and how sturdy and reliable you build your trunk. (Interestingly Hallé sees one of the trunks main functions being a storage place for waste products.)

Even if you consider a tree to be an individual, do you allow suckering in your calculation of age? There are Peach Myrtles (Uromyrtus australis) in the Nightcap Range that consist of groups of stems up to 12 m high, each of them about 1,500 years old. The individual, if you’ll allow it to include all the suckers, is probably more than 10,000 years old.

It can be argued that King’s Holly (Lomatia tasmanica), in south-west Tasmania, is even older. It’s a triploid (three sets of chromosomes and unable to produce fertile seed) and has no detectable genetic variation across the small remaining population. It’s hypothesised that fire may have fragmented what was once a interconnected clone, all starting some 43,000 years ago…

All very interesting, but what about unicellular creatures. When they divide, two new creatures are produced. Does this mean that they are not only immortal (albeit evolving through time) but the millions of cells in a lake are all the one individual? And then doesn’t this mean even your mortal dog, because it produces eggs and sperm that link it to the next generation, is really part of a long-live individual consisting of all its ancestors and descendants?

Perhaps all creatures are immortal, or not.
Email Post
Reactions: