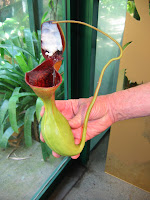 Today I spent some time gathering images and ideas about Charles Darwin for a talk I'll be giving to the Royal Botanic Gardens Foundation in March. It's a little way off, but there is so much activity around Darwin at the moment I figured I could kill a few birds with the one stone.
As it happened, there was a request half way through the day for 300-400 words about Darwin for a series of articles to run in the Daily Telegraph around our 11 February 'Dining with Darwin' event (see my posting below).
For the talk and the article I decided to focus on Darwin the botanist. In fact he did most of his observational and experimental work on plants and his home garden has been described as his 'laboratory'.
He was fascinated by orchids, and particularly how they have adapted in parallel with their insect pollinators. Carnivorous plants were another favourite and he enjoyed feeding them roast beef and vegetables - all in the interests of science of course.
Darwin also had a fondness for the dramatic media grab, sometimes with a little hyperbole (which I can empathise with...). I do like his statements "I care more about Drosera than the origin of all the species in the world" and "I never was more interested in any subject in my life than this of orchids".

We'll be trying for a little of the media attention of our own on Darwin's birthday, with 200 cup cakes for Charlie and a striking display in our 'Myrtales bed' (on the western side of Farm Cove). Come along in the morning of 12 February and join in our celebration of a great scientist, and his great idea.
Email Post
Reactions:

Anonymous said…
I think the beginning of article citing an exception in of Nepenthes, the use of animal feces, to following the same sentence Darwin noted that plants fed with meat and vegetables, takes the reader to think that carnivorous plants have a menu quite different from what Darwin experienced.

Talking Plants said…
Quite true. Most carnivorous plants (as their name implies) eat 'meat'. I was quoting a few exceptions at the start just to whet the appetite, so to speak.
Tim
4:52 am, April 19, 2011